Who’s Underrated and Overrated on the Steelers?

This is the time of year for lists, so the latest comes from CBS Sportsline, which gives us 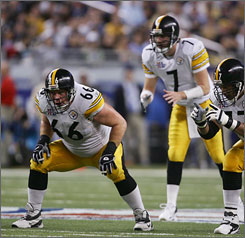 the list of overrated and underrated players, as put together by Pete Prisco. From the Steelers side, here is what Prisco has to say:

G Alan Faneca. He’s a nice run blocker, but he struggles in pass protection. The Steelers will make the wise move not paying him a new deal.

DE Brett Keisel. He always seems to be around the quarterback. This year, the Steelers plan to use some special defenses where he will line up as rover.

Wow. Can’t believe that he thinks Faneca, an all-world linemen, is overrated. Sure it would be easy to jump on that bandwagon as a Steelers fan and say that he’s overrated since he won’t be here next year at this time, but I am sorry, I can’t do it. I think that Faneca has been a man’s man throughout his tenure in Steel Town, and I for one am going to miss him next season, and I think the Black and Gold are to.

As far as Keisel goes, I am in Prisco’s corner on that one. I can’t wait to see what Mike Tomlin’s new defense will allow Brett to do, and Pete’s right, Brett always seems to be around the ball. Remember the AFC Title game two seasons ago? I seem to remember Keisel being all over the place in that game, and hope he is like that this season as well.