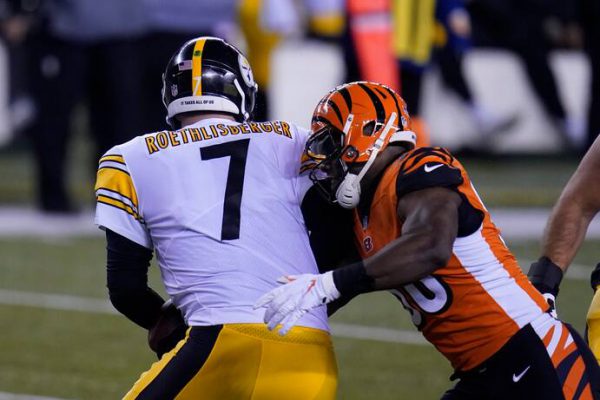 There was a time when it looked as if the Steelers wouldn’t lose a game in 2020.

Now it appears they are going to have issues winning another one.

Monday night with the AFC North division title for the taking, the Steelers blew a golden opportunity to clinch the championship with a stunning and shocking 27-17 loss to their red-headed stepchild, otherwise known as the Cincinnati Bengals.

This isn’t the same old Bengals, these are the Bengals that started a guy named Ryan Finley at quarterback, didn’t have maybe their best offensive weapon in Joe Mixon, and their defensive line had gone from formidable to mostly no-names.

Yes, these are the Bengals that beat the Steelers.

In other words – this is about as bad as it could possibly get.

Let’s break down this disaster and see what we can possibly take away from this ugly loss.

The date was November 15th, and the Steelers were coming off a lackluster but nevertheless a win over the Cowboys 24-19.

The Bengals with stud rookie QB Joe Burrow came to Heinz Field, and the undefeated Steelers dominated, laying a 36-10 whipping on the Bungles.

Ben Roethlisberger threw for 333 yards and four scores, the team racked up 377 total yards, and the defense closed in on Burrow forcing two turnovers and sacking him four times.

It was as dominating a win as the score, topping Cincy by 26 points.

Fast forward a month and six days, and you have an inspired Bengals team not only beating the Steelers by 10, but also halting a chance for the Steelers to win the division.

Now the Steelers are in complete and total panic mode, as they have two more weeks to get a win and get it right, otherwise their playoff run will not only be short, it’ll be ugly.

That could have been the worst first half of football in the Mike Tomlin era, one that saw Cincy build a 17-0 lead and dominate the Steelers to the tune of 124 to 40 in yards.

The Steelers had eight first-half offensive possessions. They committed three turnovers and punted five times. They had two first downs and managed only 40 yards.

Fans on twitter put most of the blame on QB Ben Roethlisberger, as in the first half he was 7 of 16 passes for 19 yards. He threw an interception and had a passer rating of 25.0.

Most were calling for him to be benched, but cooler heads prevailed as the team stayed with him, and the Steelers outscored Cincy 17-10 in the second half, but by then it was too little, too late.

They have a shot to start quick at home Sunday against the Colts in another now “must win,” a game they simply can’t afford to lose unless they want to go from 11-0 to a wild card team.

The Steelers 11-0 start now looks like a mirage, and those who were saying they were the “worst 11-0 team in history” are strutting their stuff tonight.

How bad has this team looked over the last 3 weeks in losing to Washington, Buffalo and now Cincy?

So how do things line up entering week 16? The Steelers host the 10-4 Colts, a team in the thick of the playoff race in the AFC looking to try and take over the Titans for the AFC South title.

The Colts normally don’t play well in Pittsburgh, as the Steelers beat them in Heinz Field a year ago, but that was a LONG time ago.

If the black and gold can find a way to beat Indy, they will still clinch the AFC North and can rest for week 17.

If not, they wind up having to go into Cleveland with the division title on the line, a game that you know Browns fans have been waiting years for.

They’ve got one more shot to get things right, if not, there’s a very good chance they will blow this division after an 11-0 start.

Day After Thoughts: The Run Game, a Tired Bunch, Dancing on the Logo
Next Day Thoughts: A Spirited Comeback, Pouncey’s Speech, What to do Against Cleveland