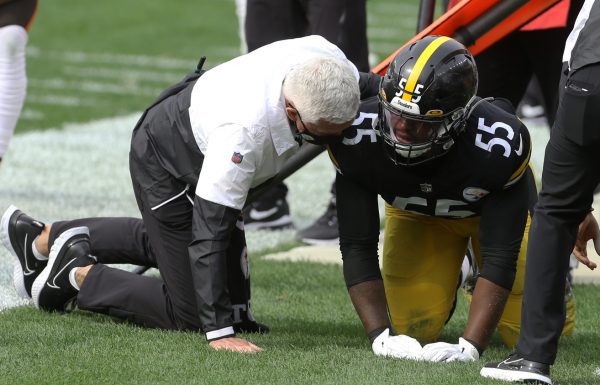 The Steelers may have beaten the Browns by 31 on Sunday, but the win did come with at a cost, as the team lost second-year linebacker Devin Bush for the rest of 2020 with a torn ACL.

Steelers source confirms what @AdamSchefter first reported: Devin Bush has torn ACL and will miss rest of the season.

Losing Bush is massive for a Steelers defense which has played very well for the most part in helping the team to get off to a 5-0 start.

The injury to Bush took place in the second quarter of the Steelers dominating 38-7 win over the Browns Sunday at Heinz Field.

The play in which the injury occurred came about when Bush came running full speed across the field to try and tackle Cleveland running back D’Ernest Johnson.

The linebacker missed Johnson, and moved awkwardly on his left knee, grabbing it as he fell and rolled out of bounds.

He didn’t return to the game, and ESPN’s Adam Schefter first reported that the linebacker tore his ACL.

Backup Robert Spillane filled in for Bush, and after the game Mike Tomlin gave props to Spillane for filling in and playing well.

Claypool Chases Down History, Steelers Stay Perfect in 38-29 Win Over Eagles
Steelers Survive, Build Big Lead and Hold on to Beat Titans 27-24 to Move to 6-0