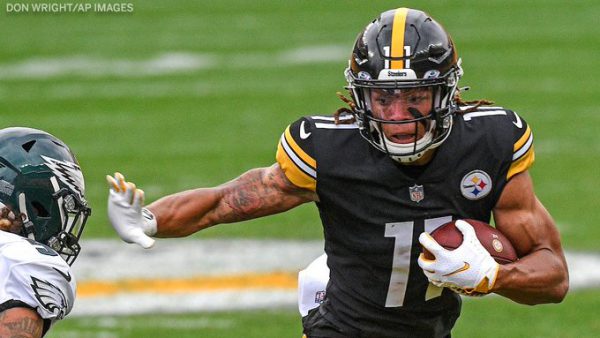 It wasn’t pretty, but history seemed to be on the Steelers side Sunday as they took on their interstate rivals in the Philadelphia Eagles.

First they maintained their mark of winning home games when having a 17-point or larger lead, which they had in the third quarter when they went up 31-14, and also they watched as their top 2020 draft pick, wide out Chase Claypool put up a Steelers rookie mark with four touchdowns, three receiving and one rushing.

The end result was a 38-29 win to keep the team perfect at 4-0, the first time the club is 4-0 since the 1979 season, a season that ended with hoisting a Lombardi trophy after beating the Rams.

There was a lot to unpack in this one, including almost a complete defensive meltdown by the Steelers, but yet another bail out to get them to their fourth win as they get ready for a huge home game against Cleveland next week.

Claypool joins Jerry Butler (1979) and Harlon Hill (1954) as the only rookie wide receivers with four touchdowns in a single game in NFL history.

Claypool in just four games is starting to see more playing time after the injury to Dionte Johnson, and it sounds more and more like after this outing he’s going to get a LOT more looks.

The Steelers just seem to have that knack to find quality wide outs in the draft, and it looks now that Claypool is set to join that list of recent great receivers to join the team.

Look for more chances for Claypool, and while teams already have to find a way to stop JuJu Smith-Schuster and Johnson, now they have to account for Claypool.

It was an awesome performance and well deserved.

We know it wasn’t pretty, and you could feel this thing slipping away after Eric Ebron coughed up the ball to allow Philly a chance to put a drive together that nearly saw them get a long field goal that would have given them the lead.

Yes the Steelers would have still had time if the field goal would have been good, but at the same time the D came up big when they needed on the last two Eagles opportunities with the ball.

Eagles QB Carson Wentz was 20-for-35 for 258 yards with two touchdowns and two interceptions and a QB rating of 75.7.

The Steelers defense got to Wentz for five sacks for minus 34 yards in the victory. Miles Sanders raced to a 74-yard TD for the Eagles, but other than that the Eagles rushed for just 20 yards all day.

Sanders had 10 rushes for 6 yards if you take away that long run, and while the Eagles were able to stay in the game, two Steve Nelson picks and a couple late big rushes by Bud Dupree and the defensive front were able to hold off Wentz and company.

The win on Sunday means not only that the black and gold are 4-0 a quarter of a way into the season, but also that the last two times they beat Philly to move to 4-0 they won the Super Bowl in 1978 and 1979.

The Steelers knock off the Eagles and move to 4-0.

The last 2 times they did that?

Now this team still has a long way to go starting with a huge AFC North game next week at Heinz Field against the Cleveland Browns, but if they can win that game they can go into Tennessee in two weeks at 5-0.

One thing that has to be a concern is the fact this team has seven road games in 11 weeks after they play the Browns.

Overall the grades for Sunday will come in mixed, but you have to give major props to the coaching staff for keeping this team focused, and also for keeping them motivated and ready after the debacle last week when they should have played the Titans.

You know there will be a lot of chirping by the Browns this week after all the drama from a year ago, but if the Steelers can maintain focus, they should be able to be sitting at 5-0 about 4:30pm next Sunday.

Video: QB Ben Roethlisberger Speaks to the Media as He Gets Ready for the Eagles
The Day After: Thoughts on the Steelers After Beating the Eagles, Moving on to the Browns