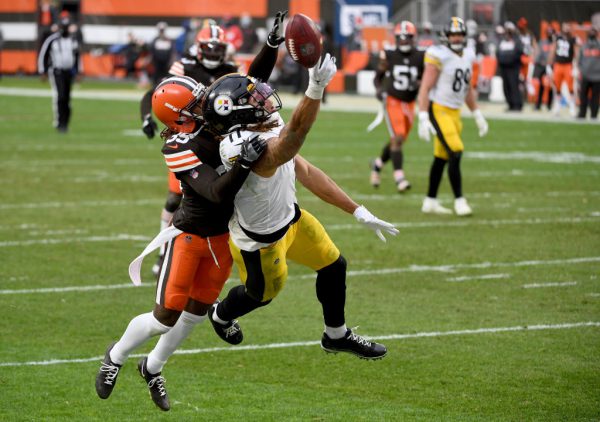 Getting out of week 17 without any major injuries as well as putting forth a competitive showing was the goal for the Steelers on Sunday in Cleveland.

In that case, it was mission accomplished.

The Steelers played well against a team that had everything riding on the season in the Browns, and in the end they dropped a 24-22 decision that wasn’t decided until the final minutes on a failed two-point conversion.

The loss by the Steelers puts them at 12-4 on the season, a season that has seen them win the AFC North, but now they will have one more meeting with their AFC North foes in the Browns next week in a wild card playoff game at Heinz Field.

It will be the third all-time playoff game between the Browns and Steelers, with Pittsburgh beating Cleveland 29-9 back in an AFC Divisional PLayoff game in the 1994 season, and again in a wild card game in a memorable comeback 36-33 in the 2002 season.

This time around the Steelers will have all their players, something they didn’t have Sunday at First Energy Stadium.

Mason Rudolph got the start at quarterback and played rather well, throwing just one interception and going over 300 yards passing (22-for-39, 315 yards, two touchdowns).

His touchdown pass to JuJu Smith-Schuster with 1:23 left made it a two-point game, but a failed two-point conversion saved the game for Cleveland, who ends the regular season at 11-5.

The Steelers settled for field goals in the first three quarters, as they fell behind Cleveland 24-9 just three seconds into the fourth quarter.

The touchdown came when Rudolph hit Chase Claypool on a 4th down play from 28 yards out drawing the Steelers to within a score.

After Cleveland ate some clock, the Steelers came right back on another drive, the big play a long pass play to Diontae Johnson that put the team inside the 10.

They scored a few plays later, but the conversion failed.

The NFL is expected to announce when the wild card games for next weekend will take place sometime late SUnday evening.