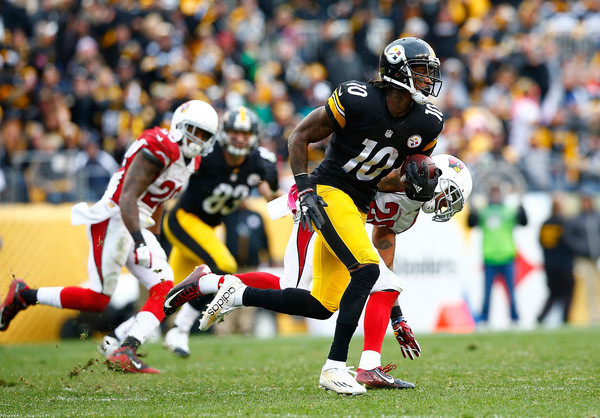 On Saturday, it was reported that the Pittsburgh Steelers face the possibility of being without receiver Martavis Bryant for the entire 2016 NFL season. Per several sources, including Dejan Kovacevic, Bryant’s suspension comes as a result of violating the NFL’s substance abuse policy. Bryant is appealing the decision per agent Tom Santanello.

In 2015, after returning from a suspension, Bryant caught 50 passes for 765 yards in 11 games. He also had six touchdowns, including a head-first grab and flip that caught the attention of everyone and earned him the nickname ‘alien’. During the playoffs, Bryant caught 14 passes for 183 yards and a touchdown.

Steelers spokesman Burt Lauten said, “Per team policy, we’ll have no comment until there’s an announcement from the NFL.”

The NFL’s CBA is straightforward when it comes to violations of the drug policy, making Bryant’s appeal an uphill battle. After missing the first four games of the 2015 season, allegedly for marijuana use, the league sees this as a second-time offense with a penalty that carries a one-year suspension. In 2015, general manager Kevin Colbert said that Bryant’s actions placed the Steelers, as a team, in a difficult situation and hoped the young receiver would learn from the mistake.

Bryant was considered immature coming out of the fourth round of the 2014 NFL Draft and veteran quarterback Ben Roethlisberger was supportive last year as the receiver underwent counseling in Florida before returning to the team.

The Steelers re-signed receiver Darrius Heyward-Bey this week – a move that may have signaled that Pittsburgh was preparing their offense to be minus Bryant in the rotation. The Steelers offered a three-year deal to the veteran receiver – a move many speculate was a direct result of Bryant’s issues.

Bryant is due $600,000 in salary for 2016 in his third year of a four-year rookie contract, but if the suspension sticks Pittsburgh will receive a salary cap relief in that amount from their books.