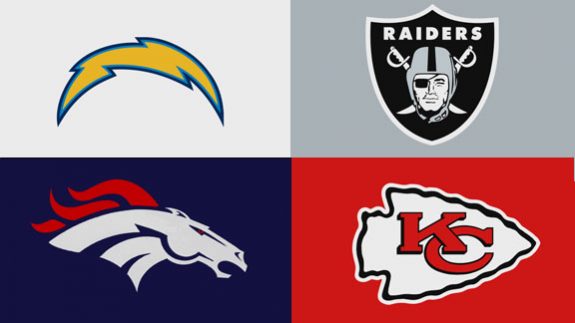 While most Steelers fans are anxiously awaiting news on their team in Pittsburgh, free agency period, which opens officially today across the National Football League, is a constant feed of potential moves, interest and players who have formerly played with the Steelers.  In this capsule, we’ll look at rumors, moves and player news from March 9 across the AFC West.

Team Needs: The Chargers have made some big moves for their 2015 team by instantly addressing a weak offensive line. By locking King Dunlap and Orlando Franklin, San Diego will be looking for a center to solidify their line.  San Diego hopes to give quarterback Phillip Rivers a dynamic receiver in Jacoby Jones – a man that is always a danger in kick returns.  Rumors are that Adrian Peterson has placed the Chargers on his short list after considering a trade from the Minnesota Vikings.

Team Needs:  After a terrible 2014 season, the Oakland Raiders need to fill nearly their entire roster with fresh talent.  With a new coaching staff in place, the Raiders look to build a team and have in excess of $60 million in cap space to begin on Tuesday.  The areas that appear to be the most pressing are in their defensive secondary, offensive and defensive lines and receiver/tight end.  The Raiders should make at least one big move that will garner a lot of attention and rumors are that DeMarco Murray may be wearing the black and silver come this fall.

Team Needs:  If Denver starts finding a lot of their available free agents, including Jacob Tamme and Virgil Green, getting picked up by other teams a tight end, defensive tackle, offensive line and safety concern may pop up.  With Wade Phillips at the helm on defense, the Broncos are expected to switch back to the 3-4, making a linebacker a need as well.

Team Needs:  Possibly the biggest positional need for the Chiefs heading into free agency was finding quality receivers.  Reportedly, former Eagles wideout Jeremy Maclin is a lock.  In 2014, not a single wide receiver on the Chiefs’ roster caught a touchdown pass and Andy Reid isn’t too happy about it.  Reid knows Maclin well since he drafted him while coaching with Philadelphia.  Maclin could add a nice punch to Jamaal Charles and Travis Kelce.  With little wiggle room on their salary cap, the Chiefs are likely to let several free agents walk.  Kansas City placed the non-exclusive franchise tag on Justin Houston – making him available.  That means if the Chiefs won’t match an offer sheet, Houston will move on.  That could make moves in the Chiefs defense a necessity.

AFC West Notes from Saturday and Sunday across the league

The NFL sends letters to 32 teams
Between the Hashmarks: Rod Woodson turns 50 today