Moving Ryan Shazier to safety would be a mistake 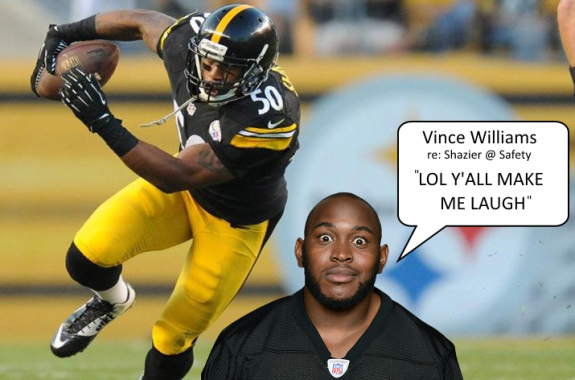 I agree with the message. The delivery, however, could use some work.

Earlier this week, Vince Williams took to Twitter to challenge the assertion that fellow inside linebacker Ryan Shazier should be moved to safety. While Shazier’s listed weight of 237 lbs. isn’t going to remind anyone of the glory days of Levon Kirkland, let’s remember that he’s entering his second year in the league and barely played last season.

Shazier appeared in only nine games (five of which he started) and racked up just 36 total tackles during an injury plagued 2014 season. The Steelers do need more from Shazier next season and beyond, but the notion that moving him to strong safety is going to make him a more effective player while simultaneously fixing all that ails the defense is ludicrous.

Kevin Colbert and Mike Tomlin spent a first-round draft pick on Shazier because they felt he could be a difference-maker as an inside linebacker. NFL teams don’t use high draft picks on projects. In a perfect world, Shazier will arrive in training camp this summer and seize control of the left inside linebacker spot and join Lawrence Timmons in strengthening the middle of the defense for a full 16 games. Another season of rotating Shazier, Williams and Sean Spence through the lineup because of injuries or ineffectiveness will call into question whether the Shazier pick was a wise one.

Now, the start of Williams’ social media screed – his initial salvo being that Shazier played defensive end in high school – has no bearing on where he should play in the pros. Setting aside the vast difference in the level of competition from high school to college to the NFL, I’d be shocked if Shazier’s current frame at 22 years old bears even a slight resemblance to the one that took the field as a 17- or 18-year-old high school player. The strength and conditioning coaches at Ohio State surely had something to do with the dominance Shazier displayed during his time in Columbus.

Williams’ comparison of his own weight – which he says is never more than 244 lbs. – to Shazier’s is somewhat more relevant to the argument. If there truly is no more than seven pounds separating these two when they’re on the field at any given time, then their respective impact on the outcome of each play has more to do with instincts and positioning than it does the amount of junk that occupies their trunk when making a tackle.

Here’s where Williams goes off the rails a little bit. He winds up his trio of Tweets on the subject by suggesting that anyone who thinks Shazier is a safety rather than a linebacker should kill themselves. At least I think that’s what the emojis at the end of his Tweet (which has since been deleted from his timeline) are meant to represent. I’ve only been on Twitter for two months, so I could be wrong. Let’s just say the proponents of fitting Shazier with a smaller jersey number and lining him up in the defensive backfield are misguided. Regardless, I think Williams can – and certainly should – leave the disembodied skull and revolver emojis in his back pocket for the time being.

The bottom line is that Shazier needs to play a full season at inside linebacker before Colbert, Tomlin or Keith Butler even consider teaching him a new position. Throwing out everything Shazier has learned so far about playing inside linebacker in the NFL just doesn’t make sense. Sign a safety when free agency kicks off next week or draft one next month, but don’t try to fit a Shazier-shaped peg into a Troy Polamalu-sized hole.

Polamalu Won’t Be With Steelers in 2015; Team Hoping He Retires
Bettis Compares Polamalu Situation With That of Hines Ward After 2011 Season