Polamalu Won’t Be With Steelers in 2015; Team Hoping He Retires 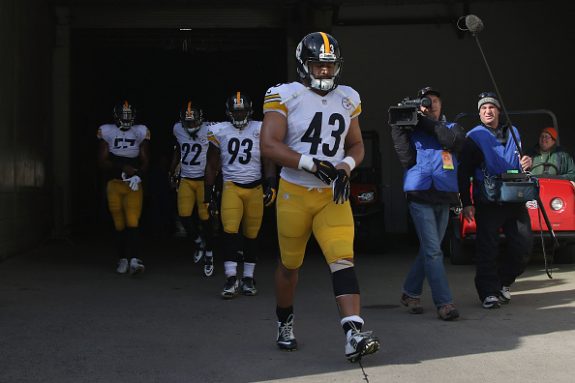 The Steelers are heading down a road that they have seen before. Following the 2011 season the team knew that the end had come for future Hall of Fame WR Hines Ward.

Ward had just finished his 14th season with the team, and the organization had decided they had to move on without him.

The wide out looked around at possibly joining another team, even going so far as to flirting with the rival Ravens.

At the end of the day though, he took the high road, walking away from the NFL as a member of the Steelers and Steelers only, saying the only team he ever wanted to play for was the black and gold.

Now they face a situation a few years later that seems similar – that being the saga of safety Troy Polamalu.

The face of the franchise for the last 11 seasons is not coming back in 2015 to the Steelers according to reports, and the club is now hoping that #43 simply takes the same road as Ward – and retires.

Polamalu is a month away from 34, and too many times in 2014 he was overmatched on the field, clearly not the same player he was when he was the NFL Defensive Player of the Year in 2010.

The Steelers will save $3.6 million on their 2015 salary cap if Polamalu is not on their roster. He turns 34 in a month, and while he probably does have gas in the tank, the Steelers and their fans have to face reality, it’s time to get younger at the safety position.

The team went out last season in free agency and signed Mike Mitchell, and while he was pretty bad last season, the team is hoping offseason surgery and a year with the black and gold will make him better in 2015.

It would look bad for the Steelers if they had to flat out cut Troy, but the NFL is a business, and there has to be understanding from Polamalu and his camp if the team does indeed release him, it’s for no other reason than it’s in the best interest of the team.

Polamalu doesn’t seem like a person that is going to hold on for the bitter end. He’s got a long life ahead of him, and often has talked about life after the NFL.

The Steelers hope that life will start soon – otherwise the team will have to carry out one of the tougher decisions they have ever made – releasing one of the most popular players in franchise history.