Steelers Draft Success And Failures Over The Past 5 Years 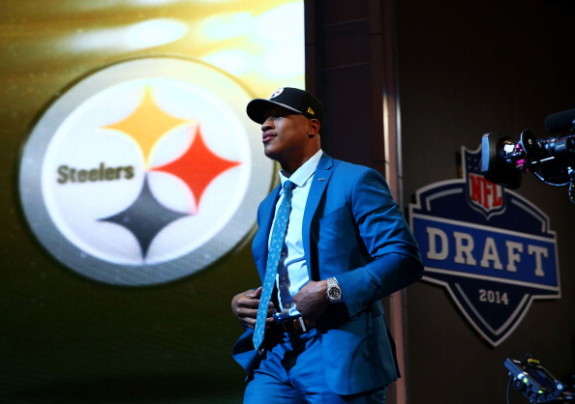 Over the past five years of the NFL Draft,  the Pittsburgh Steelers have made solid draft choices, and some that have made pro football fans scratch their heads. From finding hidden gems, such as Antiono Brown, to misses such as Ziggy Hood, the Steelers are a few solid picks away from being a complete team.

One of several things the Steelers have done well in the five most recent drafts is rebuilding their offensive line. First round draft picks Markiuce Pouncey (2010), David Decastro (2012), Kelvin Beachum (2012) and Marcus Gilbert (2011) are all reliable starters on the offensive line.

The Steelers have also done a great job of surrounding Ben Roethlisberger with pass-catching talent. Some of those players have included: All-Pro Antiono Brown (2010), Markus Wheaton (2013) and Martavis Bryant (2014).

Some of the areas where the Steelers have missed the mark on offense was at backup quarterback. Landry Jones has showed little to nothing in his first two seasons (including the preseason) and is rarely active.

At backup tight end, Rob Blanchflower is a project at best and David Paulsen (2012) out of Oregon lacked the strength and blocking ability to stick with the Steelers.

On defense, Cameron Heyward (2011) has turned into a solid player, but unfortunately the Steelers have missed quite a bit on defensive players during the same time.  Jarvis Jones (2013) is looking like more and more like a bust. Cortez Allen (2011) has been up and down. Shamarko Thomas (2013) has shown flashes but has been injured often.

It’s past due for the Steelers to hit the mark in drafting a cornerback. Drafting a good cover corner will lift this defense from a wild card team to a possible Super Bowl contender.

Mike Wallace Wants a Steelers Reunion – Bad Idea for the Black and Gold
Polamalu Won’t Be With Steelers in 2015; Team Hoping He Retires