Steelers Deal to Get Up to the 10th Pick, Take ILB Devin Bush to Help Out The D 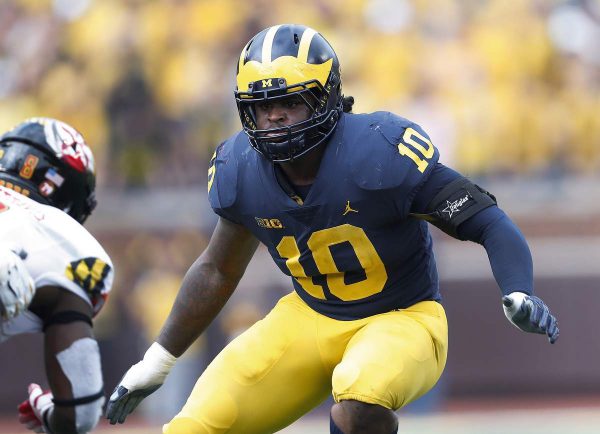 The Steelers have been looking to fill the void left with the injury to Ryan Shazier two years ago, and finally Thursday night they did that.

The team pulled off a stunner, moving up to the 10th pick to take the Big 10 Defensive Player of the Year, inside linebacker Devin Bush from Michigan.

Here’s a scouting report on Bush:

Summary: With the NFL becoming a passing-driven league, pro teams need linebackers who are fast athletes and capable of contributing to pass coverage. Bush is that kind of linebacker, and he gave perfect proof with a stellar NFL Scouting Combine highlighted by a 4.43-second time in the 40-yard dash. Bush has a skill set that is coveted throughout the NFL.

For the NFL, Bush is a seek-and-destroy linebacker. His best trait is world-class speed for a 5-foot-11, 234-pound linebacker. Bush can flat out fly while patrolling sideline to sideline and has the ability to cover a ton of ground. He displays easy speed to close on ball-carriers or receivers running into open territory. On top of his speed, Bush is an agile athlete who can break down in space and get backs to the ground. He is a steady open-field tackler and also will flash some violence, as he throws ball-carriers to the ground with authority. Bush also does a nice job of going for the strip when making a tackle.

As a run defender, Bush is at his best using speed to chase down ball-carriers. He has issues with holding his ground and taking on blocks, so he is not a skilled in-the-box run defender. That is one reason why his tackle total was depressed despite having played in a running conference. Offensive linemen are able to get a push on him and knock him back. Bush will sometimes try to run around blocks, but generally he is pretty good at holding his gap. Bush does very well defending perimeter runs and is quick to blast into the backfield when he sees a stretch play developing. He is aggressive and can be susceptible to overpursue. Bush also has average instincts that are moderately disappointing.