Undefeated No More; Steelers Suffer a Bad Home Loss 23-17 to Washington to Fall to 11-1 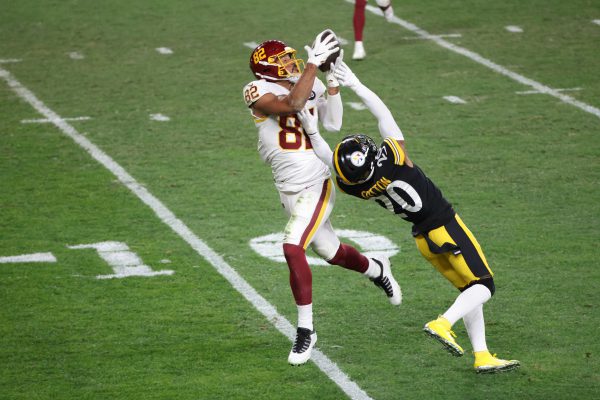 Call it fatigue, or just the NFL gods finally and the odds for that matter finally catching up to the Steelers.

Whatever the case may be, the Steelers undefeated season is no more, as Monday at Heinz Field for the first time since week 17 of the 2019 season the Steelers walked off the field on the short end of the stick, falling to the Washington Football Team 20-17.

The end came when Dustin Hopkins hit a 45-yard field goal for Washington with 2:04 left, then on the first play after the kickoff, Jon Bostic picked off a Ben Roethlisberger pass on a tipped ball to seal the win for Washington.

It’s a Steelers team that looked tired, got beat up with a couple injuries, and after they led the game 14-0 they didn’t come close to having the same focus as earlier in the game.

Now at 11-1, the AFC #1 seed still belongs to the Steelers, but they now with four games left need to win them all to make sure they hold off the Chiefs for that first-seed.

The Chiefs are also 11-1, but fell to the Raiders, an AFC team, so if you’re going to lose, you might as well fall to a team from the NFC.

Here’s a few takeaways from the loss:

Last week the Steelers got away with dropped passes, this week they did not. It’s becoming ridiculous to watch guys like Eric Ebron and Dionte Johnson have balls hit off their hands.

Last week they had an unofficial seven drops, and this week it was about six, with at least two balls hitting Ebron right in the hands.

Saying that “it’s cold” is no excuse for dropping passes, and again having to play two games in six days isn’t an excuse either, considering both have been at home.

This team better get more focused on what they are doing, as now that this streak is over, they have to get back to the basics, and Mike Tomlin should lay into this club big time for being too worried about everything else other than making catches.

You’re not going to win in the postseason rushing the football 12 times and throwing the ball 53. Last week Ben Roethlisberger threw it 51 times, and they barley were able to beat a decimated Ravens team.

Yes the team should be able to get James Conner back for the Bills game Sunday night, but just having that is not going to be enough considering that the run game wasn’t doing much when he was in there anyway.

The club needs to figure out how to run block, and do it fast, as right now the team isn’t getting the job done, and while maybe they don’t need to rush for 150 yards a game, they can help out the passing game with at least 100 yards on the ground.

The run game seems tentative, and the run blocking has been simply awful, which is part of the reason this team is now a complete one dimensional club, something that isn’t going to work come the postseason.

Most have known all season that going undefeated was a pipe dream, but this was a bad loss and leading 14-0 this team had the game well in hand following James Washington’s second quarter touchdown.

One thing this team hasn’t done well all season (for the most part) is putting their foot on the throat of their opponents, and it showed in a big time way during this loss.

They had their chances on both sides of the ball, and while the defense for the most part did their job, they didn’t get any turnovers (Washington did in the end), and also they allowed way too many plays that kept Washington drives alive.

Let’s see if they get back to the basics with the Bills up next, and if they do, if they can get back to winning ways in Buffalo Sunday night.