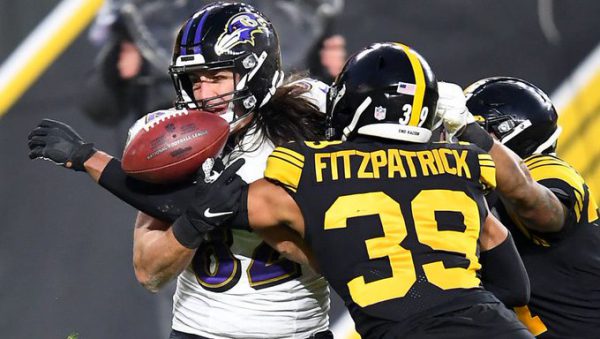 If you would have said in August that the Steelers would sweep the Ravens, winning in Baltimore by four and in Pittsburgh by five, knocking Baltimore out of contention for the AFC North title, you would have done a dance down your street.

Boy how times have changed.

Twitter and social media in general today seem to be irate at just how poorly the Steelers played on Wednesday, and Mike Tomlin calling the effort ‘really junior varsity’ was as right on as anything he’s said in 2020.

Not only did the Steelers look awful, they also lost yet another linebacker, as Bud Dupree, who right along with T.J. Watt should get mentions for Defensive Player of the Year, is done for the rest of and into 2020 with a torn ACL, suffered on a pass rush.

With all that said, the Pittsburgh Steelers for the first time in their history is 11-0. Let that sink in.

They play again in five days, Monday at 5pm against the Washington Football Team (how many times will you catch yourself saying “Redskins” this week?).

Let’s give some thoughts on this very ugly game but beautiful outcome which only puts the Steelers more in the drivers seat for the #1 seed in the AFC.

You had to love the smack talk from Mike Tomlin after the game. Never have I seen him so upset following a win, and you have to love that he felt the effort basically wasn’t there.

“It was really junior varsity, to be quite honest with you,” Tomlin said after the win.

“We couldn’t run the ball effectively when we needed to. We dropped too many significant passes, very catchable, makeable passes. We didn’t make significant plays in the special-teams game. Our kickoff coverage unit wasn’t good enough. We turned the ball over. We gave up big plays in critical moments on defense. Can’t have it.”

How much of the effort could be traced back to the fact the game was played on a Wednesday? I’m sure some, and the rest was just overlooking the “JV” Ravens team that they ran out there – you can’t convince me any differently.

Let’s see when players get back on the practice field getting set for Washington if they can get more focused and ready for Monday 5pm.

It was awful to see Bud Dupree go down late in the win over the Ravens with what is now being stated as a torn ACL.

His season is over, but it means so much more for this very solid young man who was playing on a one-year franchise deal.

He’s making $15 million this year, but is a unrestricted free agent into 2021, and now since he likely will need 10-12 months to recover, what type of deal he is going to get is very much up in the air.

It’s the chance he and his agent took not inking a long term deal, but now it’s tough to think that he’s just not going to get the type of money and be the same player upon his return.

Watching him was a pleasure the last few seasons, but it’s tough to think he’s ever going to put on a Steelers uniform again.

As for what now – 3rd round pick Alex Highsmith has a chance to be a star in the making. Let’s see if he can do it.

Yes Benny Snell Jr. and the run game ended the game on a good note, but let’s be honest, for the most part it once again stuck.

They need to get a good game from the run game, and build some confidence, and this week they have a chance of that going up against Washington who is middle of the pack in allowing 114 yards per game on the ground.

They won’t have James Conner again this week, so it’ll be Snell and Anthony McFarland Jr. who had three carries for 9 yards getting the bulk of the carries.

The play that James Washington made on 3rd down to allow this team to eventually run out the clock was one of the most clutch plays of 2020.

He’s made plays over and over, and yet for some reason even with the quarterback reportedly going to the coaches and asking to get him more playing time, Washington doesn’t seem to get reps.

All I’ve seen him do this season is make plays, and yet even in multiple wide out sets he’s sitting on the bench.

On a day like Wednesday when Dionte Johnson couldn’t catch a cold, why not try to go to Washington more?

In the Steelers last game Terrell Edmunds had two picks in the 27-3 win. He could have been the goat Wednesday (not in a good way), against the Ravens when he whiffed on a Marquis Brown catch that allowed him to eventually go 70 yards for a score.

It’s the type of play that loses games in January, and what Edmunds was doing up 19-7 and having the game in hand was inexcusable.

You do that against the Chiefs, you can bet Pat Mahomes and company will take advantage of it (watch them against the reportedly big bad Buccaneers Sunday?).

Big plays have hurt this team in 2020, and it’s a massive thing they have to shore up to try and keep winning games and keep that #1 seed.

Steelers and Ravens Pushed Back…..Again….This Time to Wednesday at 3:40pm
Undefeated No More; Steelers Suffer a Bad Home Loss 23-17 to Washington to Fall to 11-1