Day After Thoughts: The Run Game, a Tired Bunch, Dancing on the Logo 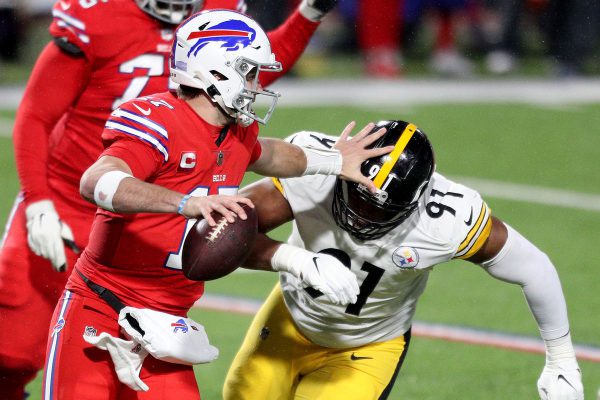 Sunday night in New York the Steelers lost their second straight game, falling to 11-2 on the season, and for the first time in 2020 they are now looking up at the Super Bowl champion Chiefs who beat Miami to get to 12-1 Sunday.

The Steelers played good for about 25 minutes, and then fell apart, and by the time it was said and done, they trailed 23-7 and couldn’t rally enough to get back into the game.

Now the reality of the situation stands as follows – this team has three games left, and if they are going to impact the 2020 postseason they had better figure out a LOT and win all three.

Here’s a few quick thoughts waking up on a Monday morning thinking about what by far was the worst game of the season for the Steelers.

47 yards on 17 carries, a 2.8 yards per carry average. The Steelers at least made an effort to run the ball, and a couple times it looked as if they were going to be able to be somewhat successful with a few yards here and there.

Their longest three runs of the night were 5 yards, 6, and 7. James Conner was the “leading” rusher with 18 yards on 10 carries, and Benny Snell had 14 yards on three carries.

For whatever reason the team still carries Jaylen Samuels on this roster, to me he’s not worth a helmet at this point, but they gave him the ball 4 times for 15 yards, and threw him three passes for 18 more yards.

Mike Tomlin was asked after the game if a week was long enough time to “fix” the offense, which to me means very much the run game.

Now let’s see if he really is right next Monday at Paul Brown Stadium.

The first quarter and a half the Steelers looked like they were not only going to hang with the Bills, but also might just steal one.

It was as if the game plan on defense was simple – blitz and rush Josh Allen with everything you have on every play and either force a few turnovers to set up short fields, or hit him early and often and rattle him.

The plan kinda worked early on, they got a pair of turnovers and eventually did enough on offense to turn it into a 7-0 lead.

Then after the pick six that make it a 9-7 game, the Steelers as a team seemed to have the air come out of the balloon, and the game was as good as over.

Give the Bills and their coaches credit, they used halftime to make adjustments, and early in the 3rd quarter they outplayed the Steelers, and by the time it was said and done, they led the game 23-7 and it was over.

Three games in 12 days, it’s just too much. Blame the NFL, blame the Ravens, whoever – the bottom line is hopefully the Steelers can rest for a few days before they start prep for Cincy on Monday night.

Can someone explain to me what the H**L JuJu Smith-Schuster was doing prior to the game dancing at midfield on the Bills logo?

You didn’t see it?

Here – check it out.

JuJu on the Bills logo before the game! #Steelers pic.twitter.com/E9eAKkke1c

While you can point to the standings and say “hey, we’re 11-1, we’ve earned the right to be arrogant,” that’s up to you, but to me all this does is piss off the competition, and in this case knowing how tough this game was going to be, why would you do something so crass prior to a huge game?

By the way, don’t think the Bills didn’t notice.

The #Bills clearly took the #Steelers dancing on their logo seriously. Josh Allen before the game: "Let them do all the talking and the f****** dancing… we do all the work."

It’s hard for me to believe that Mike Tomlin would like or stand for such hijinxs, and if I was him and I would pull Mr. Smith-Schuster aside and quietly tell him to cut the crap out – and anyone else on the team (saying on Twitter prior to a game against Baltimore it should be an “easy win” qualifies”) doing things to get a team ticked off, it better stop – now.