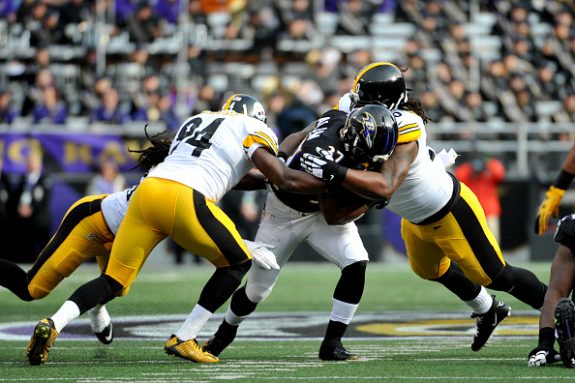 It all comes down to this – the AFC North on the line on Christmas Day at home, and the Steelers looking to get a win that will clinch their second AFC North Title in three seasons.

All they have to do is beat their biggest rival on National TV, a team that has been a thorn in their side since they arrived in Baltimore back in 1996 from Cleveland.

The Ravens come in with in their minds nothing to lose. Everyone seems to be on the Steelers bandwagon after a comeback win after trailing 20-6 last week against the Bengals, as they rallied for a 24-20 win to improve to 9-5 on the season.

A win and they will have the division clinched and at least one home playoff game. Here’s our official keys to the game along with how we think it will play out and if the Steelers will be celebrating on Christmas night.

In the first game Le’Veon Bell was basically a non-factor, rushing for just 32 yards and catching another 38 yards of passes in the 21-14 loss. The offense as a whole was out of sync that day in Baltimore, but if the Steelers are going to get things going this time around, they have to have a big game against two of the big Ravens tackles, Timmy Jernigan and Brandon Williams. They also have to keep an eye on the two Ravens inside linebackers C.J. Mosley and Zach Orr. Bell has been the best offensive player in the league the last few weeks with the Steelers winning games, and if they are going to beat Baltimore they have to get a big day from Bell.

2. Keep Flacco on his Toes

The last time the two teams played the Steelers were able to get to Joe Flacco three times, and he was held for 18-of-30 passing for 241 yards. He was able to convert some big third downs, but for the most part the Steelers D got burned on the big play to Mike Wallace, and on a few plays which allowed some long Justin Tucker field goals. Historically the Steelers have done a nice job on Flacco, but they can’t fall asleep on him, like they did on the big play to Wallace which went down as the longest play in Ravens history. Get to Flacco and it could be a long day for the Ravens.

The Steelers committed a ton of penalties in the first game (13 for 99 yards), and one way they can find themselves losing this game is by making stupid mistakes with penalties and undisciplined football. Guys have to play smart football on Sunday, and can’t find themselves doing things like late hits and silly post play fouls. They did a great job last week against the Bengals allowing them to be the fools making bad mistakes and benefiting from it, and if the Ravens want to try and get them to commit bad penalties, they have to be smarter than that.

Prediction: The Steelers haven’t beaten the Ravens since a 43-23 win at Heinz Field back in 2014, and I think they are going to find a way to get the job done this time around. They are playing about the best football in the NFL, and the way the defense has recreated themselves with guys like Ryan Shazier, they have a much different look than even the first game back in Baltimore. The weather shouldn’t be a big factor which is good, and the offense should be a lot more in sync than that first disaster when they played like they were sleepwalking. Look for a much more complete game this time around, and for the team to be wearing AFC North Champ shirts come Sunday evening. Steelers 24 Ravens 10