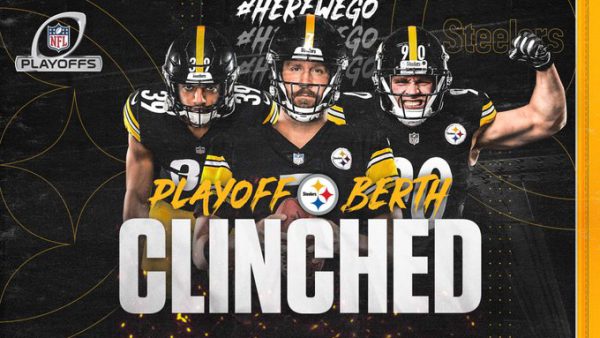 While it was just a matter of time for it to happen this season with a mark of 11-1, the Steelers Sunday officially reached one of their goals, as they are headed back to the postseason for the first time in two seasons after a loss in the 1pm games by the Miami Dolphins at home to the Kansas City Chiefs.

Miami held a 10-0 lead over Pat Mahomes and the defending Super Bowl champs, but per usual it was Mahomes and the Chiefs with the last laugh, rallying to build an eventual 30-10 lead and hanging on for a 33-27 win.

The Steelers are hopeful that they can beat the Bills and have the Browns lose to the Ravens in Cleveland Monday.

If that happens the Steelers not only would be in the playoffs, they would also clinch the AFC North.

The last Steelers playoff appearance did not end so well, that coming in 2017 when they lost in the AFC Divisional round to the Jacksonville Jaguars, falling at home 45-42.

Undefeated No More; Steelers Suffer a Bad Home Loss 23-17 to Washington to Fall to 11-1
Steelers and Bills Announce Inactives for Sunday Night Football