Roethlisberger gets little love from ESPN and 26 anonymous NFL ‘insiders’ 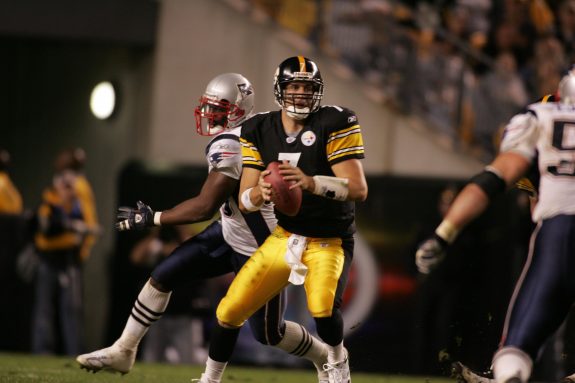 It might just be me, but whenever I hear a big name sporting news outlet like ESPN put out what they consider to be a definitive article that includes anonymous sources, I want to move on to something else.  In this case, Mike Sando of ESPN put out a piece grading projected NFL starting quarterbacks for the 2014 season into four tiers.  The panel of anonymous “league insiders” graded each projected starter on a scale of 1-5, with one indicating a top-tier rating.  Five was considered the “worst” according to the report.  Without revealing who these experts were, Pittsburgh Steelers quarterback Ben Roethlisberger was placed into the second tier.  That rating isn’t necessarily a bad placement for a quarterback who entered the league in 2004, but in comparison to some of those who received higher or similar rankings – Roethlisberger certainly got little love from the supposed panel.

According to Sando, the “league insiders” were composed of eight general managers, two former general managers, four personnel evaluators, seven coordinators, two head coaches, two position coaches and a top executive.  By anonymous – Sando clearly does not state what teams any of these insiders are currently or have been affiliated with.  In fact, the only revelation made is that they seemed to be attached to the NFL in some way.

One of the strangest parts of the report was how the grades were determined.  According to the information given by ESPN, once the results were averaged for each quarterback, the numbers were rounded to the nearest tiers (a 2.49 would round to Tier 2 and a 2.50 to Tier 3).  ESPN Stats & Information’s Alok Pattani added one point for every one-tier gab between the average tier level for the QB and a voter’s ballot.  In a convoluted system of penalty points, one would almost have to be a member of the Stats & Information’s staff to completely understand the value of the entire poll.

Where Roethlisberger Rated and Why

Roethlisberger received a 1.85 average rating.  One offensive coach placed Roethlisberger in the top tier but “several GMs” were said to have believed that Roethlisberger has falled into the second tier over the last two seasons.  “If you were there in Pittsburgh, you saw (Roethlisberger) run the no-huddle, you saw the command, you saw him run and make plays,” one coordinator was quoted as saying.  “Other people will not think as much of him.  He is a very good quarterback, able to get himself out of tough positions.”

Analyzing the results, it appears that most of the ‘insiders’ felt that Roethlisberger fell to the second tier only because a select few gave him a grade below that – averaging the Steelers’ quarterback score to just beneath the top tier (according to their system).

When compared to the other players in the second tier, Roethlisberger has a skill that none of the other quarterbacks do – the ability to extend plays.  Yes, Roethlisberger had a difficult past two seasons.  The Steelers, in general, had a difficult past two seasons.  It begs the question whether an NFL quarterback should be rated based on how their offense performs or based upon their own personal statistics.

By comparison, Tom Brady (New England Patriots), who was voted into Tier 1 has the following stats for the same time period.

Roethlisberger and the Steelers shouldn’t feel offended by the ESPN ranking.  If anything, Roethlisberger should be able to look at who he has been compared with and have a conversation with offensive coordinator Todd Haley about the faster, sleeker offense and how they can utilize their selection of weapons to give critics something to scratch their heads over.  Granted, Roethlisberger’s best seasons statistically were not between 2011 and 2013, but he hasn’t slowed down any.  Despite injuries, Roethlisberger came back in the second half of the 2013 regular season to lead a struggling Steelers team to a potential playoff berth that just didn’t come to fruition – but not due to a lack of effort.

Apples to apples, Roethlisberger has one person to compare himself to and that would be himself.  Pundits, ‘insiders’, ‘experts’ aside; Roethlisberger is still an effective franchise quarterback that has the skills, intelligence, arm strength and ability to read defenses that other NFL quarterbacks envy.
Do you agree with ESPN’s assessment of Roethlisberger?  Discuss this and the other quarterbacks by Tiers by clicking here, and don’t be afraid to give us the details to back it all up.

You can find the entire tier system here.  If you cannot access the entire article (you must be an ESPN Insider to do so), please check out our forum on GridironChatter.com for the full list.