Steelers Mixing Improvement And Competition Together 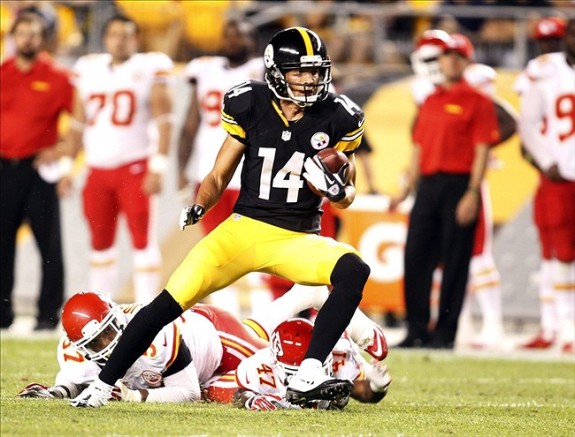 Justin Brown spent last season on the Steelers practice squad. With size,improved route-running abilty,and a whole year to learn the playbook, the opportunity is there for Brown to shine. With experienced competition, Brown must give everything he has.

Brown stands at 6’3″, 209 pounds. His size will give him an advantage over the smaller opposing corners in training camp. So far Brown has been very impressive in offseason workouts. Brown has progressed by leaps and bounds compared to last season. On June 11,2014, Brown shared first team reps on the offense. With his improved route-running ability, the playbook will be opened up to Brown. The negative for Brown, though, is that his competition has more experience than he does.

Derek Moye is a 6’5″ receiver who has played with the first offense at times last season. His Week 2 touchdown in the redzone vs the Cincinnati Bengals proved he has the ability to be a threat in scoring situations. Moye has shown the Steelers that he has a good combination of size and speed.

Moye and Brown must show their ability to catch passes in traffic while at training camp, something neither did last season.

Darrius Heyward-Bey, with his 4.28 speed, is one of the fastest players in the NFL. With 2,380 yards receiving and 14 touchdowns, Heyward-Bey has the upper-leg on Moye and Brown in regular season and playoff experience. If Bey shows deep threat ability, he will be hard to cut from the team.