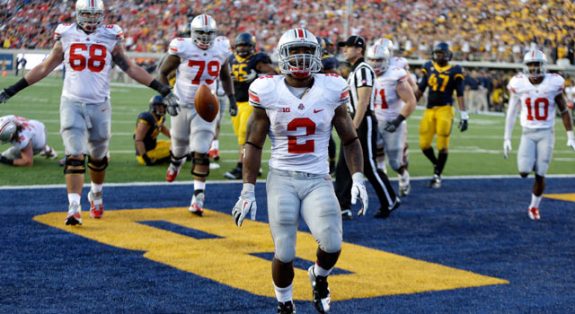 ‘Diminutive’, ‘backup’, ‘un-drafted’ – they’re all words that have been tied to Ohio State Buckeyes running back Jordan Hall. But so are ‘record-holder’, ‘optimistic’ and ‘leader’; words that interest the Pittsburgh Steelers more than anything negative.  By the middle of June of this year, Hall wasn’t sure that the adversity he’d overcome in college was going to convert into an NFL career.  Offseason practices had begun and he had yet to get a call from any of the 32 NFL teams.  A native of Jeanette, Pennsylvania, Hall had been a regular visitor to the Steelers’ training camps in Latrobe, but he’d been in the stands watching the action.  After the Steelers released cornerback Deion Belue, however, Hall received a call from the Steelers to attend an open tryout during rookie mini-camp.  And now, it looks like Hall will get yet another chance to prove what he has to offer as a football player when he attends the Steelers’ training camp on July 24 – this time on the field.

At 5’9″ and 191 pounds, Hall is small for an NFL running back, but so is Cincinnati’s  Giovanni Bernard (and look what Bernard did as a rookie for the Bengals).  Hall is the very definition of one who overcomes adversity.  Entering the 2012 season for the Buckeyes, Hall was the favorite to become the starting running back.  A three-year letter winner who is ranked number 25 all-time with over 2,500 all-purpose yards, Hall saw his dreams of an outstanding collegiate career come to a crashing halt due to an off-season foot injury and surgical repair, then a knee injury, that kept him on the sidelines through preseason camp and all but three games of the NCAA regular season.

“Missing camp and the games was one of the toughest things I’ve ever had to do,” Hall said in an interview with Game Day Magazine (Nov. 3, 2012).  “To have to stand by and watch all my teammates work so hard to get better and not be a part of it was torture.”  Hall ended up medically red-shirting that season and watched a fellow teammate, Carlos Hyde, take his starting spot away.

He returned in 2013 to play in 13 games and rank third on the team in rushing (536 yards, 8 touchdowns), busting loose for a career-long 49-yard touchdown against Buffalo.  Hall also set a career-best 159 rushing yards against Buffalo, then broke it when he ran for 168 rushing yards against California, scoring three touchdowns.  Hall became an all-purpose performer for the Buckeyes and finished his collegiate career ranked 12th all-time with 3,486 all-purpose yards and with Top 5 career totals in kickoff returns (4th; 49), kickoff return yards (3rd; 1,308) and a game average of 67.5 yards per return (against Colorado).  In his ten career starts, Hall averaged 90.5 rushing yards-per-game and scored ten touchdowns on the ground.

And then adversity struck again.  Hall didn’t hear his name announced at Radio City Music Hall by NFL commissioner Roger Goodell.  The phone didn’t ring.  He contemplated his future in football, considering whether he should try his luck in the Canadian Football League.  He dreamed of playing for his hometown team (the Steelers), but he had no promising signs until the Steelers invited him for the tryout and minicamp practices.

On July 24, Hall will take a short ride to Saint Vincent College and he told Ray Fittipaldi of the Post-Gazette that his dream has come true.  Even if he doesn’t make the final roster.  “It’s crazy I’m going up there, to even think about that,” said Hall.  “It was a dream growing up and now it’s here.”

Hall’s challenge at training camp won’t be to bump Le’Veon Bell, LeGarrette Blount or Dri Archer out of their roster spots, but he will get an opportunity to push Alvester Alexander and other running back hopefuls from the practice squad.  Hall wants a coveted spot with the team.