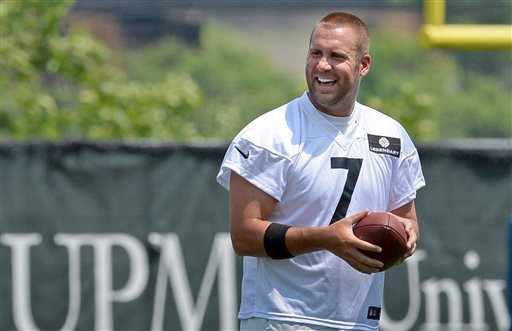 Thursday will be the final day for the Pittsburgh Steelers to make the most of their 2014 mini-camp, one final step before training camp’s opening on July 25 and the pre-season.  Several positional battles have been underway as the Steelers try to iron out what will be their final 53-man roster, but they have a while to get young guys on the field with veterans and put them through the paces before that time.

After releasing cornerback Deion Belue, the Steelers signed former Ohio State running back Jordan Hall on Tuesday.  Following an open tryout during rookie mini-camp, the Steelers took a second look at Hall who recorded 3,486 all-purpose yards, but has the versatility to be used on special teams as well.  Hall posted 683 yards returning kicks for the Buckeyes, but will struggle to make a final roster in 2014.  It is possible the Steelers will utilize Hall as a scout team player to push Le’Veon Bell, LeGarrett Blount and Dri Archer to perform at an appropriate level and give the younger Steelers defense someone to zero-in on at practices.

Rookies have been spending time learning the playbook on the field, in meetings and through coaches and veterans.  They are also learning how much faster play in the NFL is than college.  Seventh-round draft pick Robert Blanchflower (tight end) says that the young guys are also learning life lessons.  “Anyone that leaves college and has to go to the real world to do a job has to deal with a lot of things they didn’t have to deal with growing up…There is a great support system (in Pittsburgh).”

Veteran defensive assistant John Mitchell has been witnessing the changing of the guard and a transition from position to position.  “I’m excited about what I have to work with,” said Mitchell.  “I have some talent.  It’s my responsibility to get the best out of (the players)…”  Mitchell specifically mentioned that seeing his defensive front in pads has impressed him to remind them to stay low, use their hands and get downfield.  “I want them to get in football shape because that’s what it takes.”

Sixth-round draft pick (2014 NFL Draft) Daniel McCullers has been working on the fundamentals, especially getting off blocks.  Second-round pick Stephon Tuitt has some growing to do, according to Mitchell, but looks like he will be a Steelers staple for quite some time.   “I’m going to play him as much as I can,” admitted Mitchell.  “When he’s ready to play and we can play him in certain situations I’m going to put him in the ballgame.”

Offensive line coach Mike Munchak sees Maurkice Pouncey leading and improving as the offensive front gels in camp.  “(Pouncey is) a natural leader,” said Munchak.  “These guys rally around him…I’m really excited as a line coach (when) you know you have a guy like him locked up for a long term.”  Munchak is also excited about the level of competition among his linemen.  “We have (Kelvin) Beachum working left tackle and Mike (Adams) and Marcus (Gilbert).  I think you got some guys that can really do some good things,” said Munchak, “and again I’m asking them to do different things than they’ve done in the past…everything is not going to change overnight in what we want to do.  I’m kind of watching to see what they’re good at, trying to hopefully improve their game as we go forward.”  Adams has been playing on both sides and with Guy Whimper, Munchak feels the tackle position is solid – and tough.

Defensive backs coach Carnell Lake likes what he has been seeing between Troy Polamalu and Mike Mitchell as veteran safeties.  “I’m excited to see them play this year,” said Lake.  “Both of them have experience, especially Troy.  I just think they need to spend (mini-camp) understanding each other, getting to know each other personally, and I think they’ll carry that into training camp.”  Mitchell explained the new situation as something you jump into and learn to trust the other guy.  “The more a guy trusts you, the more apt he is to understand you,” said Mitchell.  “That comes with time.  You don’t gain that in a day.  You have to do the right thing repetitively, and then you start to build your relationship from there.”

For Polamalu and Mitchell, mini-camp has proven thus far to be a process where communication has been key.  “It’s great to meet (Mitchell) in person and to work with him,” said Polamalu.  “Really excited…There’s always an adjustment, but the safety position, I think, for every team is just a plug-and-play position.  Obviously here, it’s really unique in how we work things, how we play things, how we’re able to maneuver different positions of the defense, the understanding of the defense.”  And Polamalu is counting on the pairing with Mitchell to be one as successful as he had with Chris Hope and Ryan Clark.

While defensive coordinator Dick LeBeau heralds the speed he has gained on the defensive side of the ball, head coach Mike Tomlin has been generally pleased with the way camp has progressed.  Following the first day of mini-camp, Tomlin told the press that the team had “a good beginning” and that work has continued since practices began over the past few weeks.  “But it is good to get out here in a formal-like way and put a nice finishing touch on what has been a productive offseason for us,” expressed Tomlin.  “These guys have really been working hard.  We are going to try and put them in stressful situations to the best that we can under (the) circumstances.  I think more than anything they have an attitude that is geared toward embracing it.”

Have a hot tidbit about mini-camp and the competition?  How do you think it all stacks up? Join the discussion by clicking HERE and share your opinion.