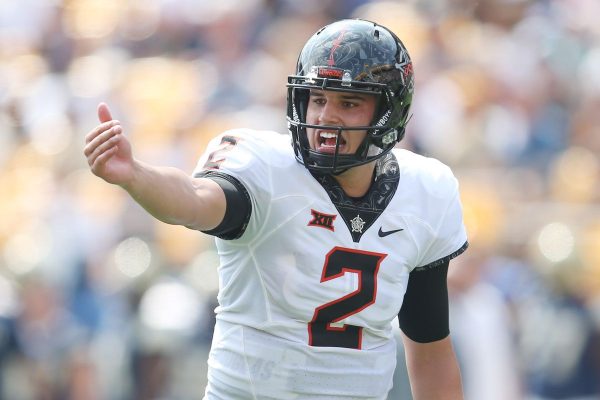 Ben Roethlisberger stirred a controversy when he questioned why the Steelers would use a third-round draft pick to take Mason Rudolph when so much immediate defensive help was available.

The Roethlisberger-Rudolph narrative played out on talk shows and social media for a week with questions percolating about whether the franchise quarterback would snub the highly touted rookie once offseason practices commenced, Joe Rutter of the Pittsburgh Tribune-Review reports.

Rudolph put an end to the speculation Friday on the first day of rookie minicamp. He revealed that Roethlisberger sent him a text message on Thursday night.

“He just reached out and said good luck in rookie minicamp,” Rudolph said. “I was really appreciative of that. I haven’t met him yet, but I’m looking forward to it.”

The two will get a chance to get acquainted May 22 when organized team activities (OTAs) are held over a three-week period. Rudolph seems to know his role in the pecking order, which is behind Roethlisberger and, for now, veteran Landry Jones and second-year player Josh Dobbs.

Being second string is foreign to Rudolph, yet he gladly will sport uniform No. 2 -– the same digit he wore in high school and college. Aside from his freshman year at Oklahoma State, Rudolph has opened every season as a starter since ninth grade when he was a wide receiver at Northwestern High School in Rock Hill, S.C.

“My role is day by day,” Rudolph said. “Obviously, I’m not starting. I’m looking forward to working with Josh and Landry and Ben and maximizing each rep with these guys, with all these rookies, bonding and getting our chemistry right.”

Will the Steelers and RB Le’Veon Bell Reach a Long Term Deal by the July Deadline?
Steelers Tease Showing Off New Throwbacks for the 2018 Season