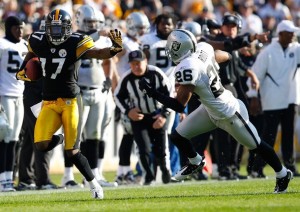 It was the talk of the weekend around Steeler Nation, rumors going around that a former Steeler wants back with the team, much to the surprise of no one.

That former Steeler is wide out Mike Wallace, who left the team following the 2012 season and inked a huge deal with Miami with $60 million over five seasons.

Now after just two years, the Dolphins want to restructure the deal with Wallace, but he wants nothing to do with it.

Wallace has 3 years left on his deal at $32.9 million, and if Miami can’t find a trading partner, they may just have to part ways with him.

The Sun Sentinel reported that the speedy receiver would rather get let go and test free agency than go back to Miami, where in 32 games he has just 140 receptions, 1,792 yards and 15 touchdowns.

CBSSports.com NFL Insider Jason La Canfora reports that Wallace wants to go back to the team that drafted him, that being the Steelers.

Can you imagine an offense that would boast Antonio Brown, Wallace, Markus Wheaton and Martavis Bryant along with Heath Miller at TE and Le’Veon Bell at running back?

While that’s tempting, there’s no way the Steelers would bring him back and take a $12.1 million cap figure for 2015 for a wide out that bailed on them as quick as he could two years ago.

At the end of the day, the Steelers need help on defense, not on an offense that set franchise records in 2014. In other words, Mr.Wallace can take his talents elsewhere.