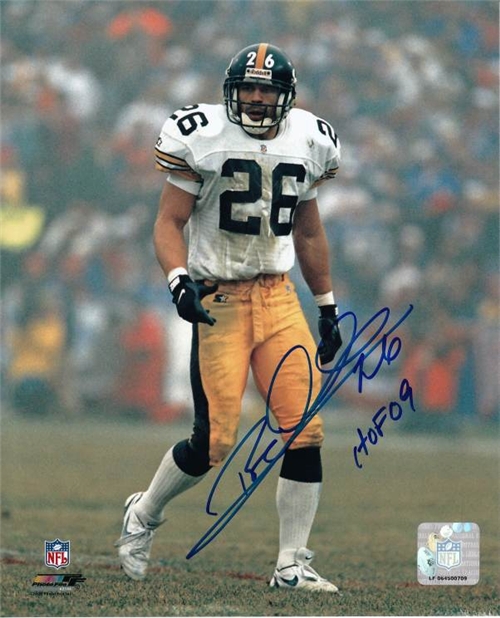 It has been awhile since I’ve done a “Between the Hashmarks” feature, and I thought it would be perfect to do one today – on Hall of Fame cornerback/safety Rod Woodson – his 50th birthday.

Born March 10, 1965, Roderick (Rod) Kevin Woodson played in the NFL for seventeen seasons.  His decade with the Pittsburgh Steelers helped jump start a career that included playing with the Baltimore Ravens’ Super Bowl XXXV team, the San Francisco 49ers and Oakland Raiders.  Woodson holds the NFL record for interception returns for a touchdown (12) and was named the NFL Defensive Player of the Year in 1993.  His 71 career interceptions ranks him at third all-time in NFL history, earning Woodson an induction into the Pro Football Hall of Fame in Canton, Ohio (Class of 2009).

A Fort Wayne, Indiana native, Woodson played college football at Purdue University before being drafted in the first round (10th overall) in the 1987 NFL Draft by the Pittsburgh Steelers.

In 1996, I had the honor of writing to Mr. Woodson at his Woodson’s All-Star Grille at One Station Square East Warehouse in Pittsburgh.  What I got back was a fantastic letter.  Later, I corresponded with Mr. Woodson again and received an autographed photo that I added to the over 7,500 Steelers cards, autographs and special memorabilia I have collected over the years.

Woodson was named to the Pro Bowl eleven times, a record for a defensive back. He was also the first player to earn trips to the Pro Bowl at cornerback, safety and kick returner.  He was named 1993’s NFL Defensive Player of the Year by the Associated Press. He was also a 7-time All-Pro selection. Woodson finished second to Darrell Green in the 1988 NFL Fastest Man Contest.

In 1994, he was named to the NFL’s 75th Anniversary Team, one of only five active players to be named to the team. The others were Jerry Rice, Joe Montana, Reggie White and Ronnie Lott. In 1999, he was ranked number 87 on The Sporting News’ list of the 100 Greatest Football Players. The College Football News also honored him as one of the 100 greatest players of the 20th century.

Woodson was the type of player that helped define what a prototypical defensive back should be in the NFL at the time.  His height and athleticism allowed him to make some of the most daring moves on the field, including a strong corner blitz that once knocked out quarterback Warren Moon (Houston Oilers).