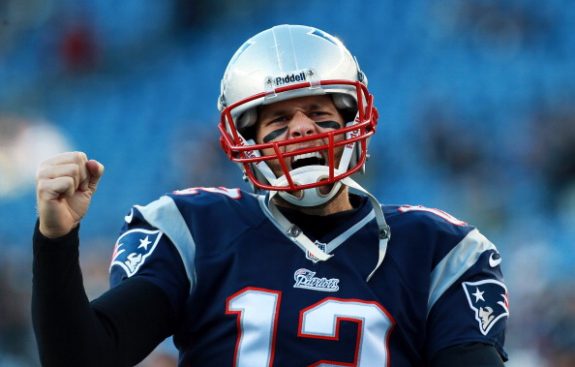 With the Steelers getting set to open the season in just two days, I felt it only right to expose Steelers Gab to a chapter in my book – “100 Things Every Steelers Fan Should Know Before They Die,” about maybe the most hated opponent the Steelers have ever had – Tom Brady.

Brady’s chapter is entitled “Public Enemy #1,” and after seeing how he has killed Steeler Nation over the years, it’s not hard to argue he’s the most one hated player of Steeler fans everywhere.

OR, if you want me to personalize you a copy for a friend or family member for the upcoming holidays, let me know by emailing me at matt@nflgridirongab.com and I can sell you one at a discount.

So here goes, enjoy (or not) the chapter on the player Steeler fans love to hate – Tom Brady:

A backup quarterback named Cody Carlson once took over for an injured Warren Moon in 1990 and on the final day of the regular season torched the Steelers to knock them out of the playoffs, and worse, it came in front of a national audience on Sunday night football.

With that said, no one player seems to have had the disdain of Steeler Nation more than that of Patriots future Hall of Fame quarterback Tom Brady. He has given the Steelers nightmares, and basically has been responsible for keeping the Steelers out of not one, but two Super Bowls under Bill Cowher. He also has recorded a couple of huge regular season wins as well, again beating Cowher and now Steelers coach Mike Tomlin.

To say that Brady is everything that the Steeler fans dislike is an understatement. He’s handsome, married to a model, and has graced the cover of GQ magazine. Yuck. If there’s anything that Steeler fans hate, it’s a guy that not only seems to have it all on the field, but off of it as well. You can’t deny Brady’s success though, as he’s a for sure first ballot Hall of Famer, and a guy that has broken plenty of hearts in Steeler Country.

The dislike of Brady started in the 2001 season, as the QB was the starter as New England came to Pittsburgh as heavy underdogs in the AFC Championship game against Kordell Stewart and the 13-3 Steelers. He didn’t have all that huge of an impact on the upset win, but did go 12-for-18 for 115 yards before he left the game with a knee injury and was relieved by Drew Bledsoe.

New England though ended the Steelers season 24-17 mostly thanks to a blocked field goal for a score, and a punt return for a score. Even with that, the stage was set for Steelers fans to disdain Brady as the following week he hoisted the Super Bowl trophy after beating the St.Louis Rams 20-17 in New Orleans.

The two teams met on opening night the following season, and with revenge on the mind of the Steelers they were once again put to sleep by Brady and New England, as he threw for 294 yards and three scores as the black and gold were soundly beaten 30-14.

It took a bewitching holiday two years later for the Steelers to finally stop Brady. On Halloween 2004, rookie QB Ben Roethlisberger and the team halted the Pats 21-game winning streak, winning 34-20 as the team went 15-1 in the regular season. Heartbreak by Brady again through would follow.

In one the of the toughest playoff losses in Steelers history, Brady and New England returned to Heinz Field on January 23rd, and soundly beat Pittsburgh in the AFC Title game 41-27. Brady was on fire all day, hitting on 14-of-21 passes for 207 yards and two touchdowns to go along with a QB rating of 130.5.

It was a long hard day for Cowher and the Steelers, and yet another day that Brady celebrated at the Steelers expense. Maybe the toughest part of the day was the fact that the night before Brady was getting intravenous treatment as he ran a temperature of 103 degrees.

The following season he once again came into Pittsburgh, and rolled the Steelers for 372 yards going 31-of-44 as the Pats won 23-20 in week three of the NFL season. About the only saving grace was the fact that New England was knocked out of the playoffs by the Broncos, and the following day the Steelers topped the number one seed Colts in the playoffs to earn the right to travel to Denver to play for the right to go to the Super Bowl, which of course the team won to eventually win their fifth Super Bowl.

The final Brady win over the Steelers came in week 14 of the 2006 Patriots regular season undefeated season. Upset by a guarantee by Steelers safety Anthony Madison that the Steelers would win, Brady gouged the team, going 32-of-46 for 399 yards and four TD’s as New England won 34-13. It was the first time that Mike Tomlin felt the wrath of Brady against a Steelers defense, and the QB made it look rather easy.

At the end of the day, the numbers and record Brady has put up against the Steelers cannot be denied. He owns a lifetime 5-1 mark against them, throwing for 1658 yards, hitting on 123-of-212 passes with 11 touchdowns and three interceptions. Maybe one day in a big game the Steelers will have the last laugh, but for now, Brady remains public enemy number one on the Steelers list of players we love to hate.