Worilds At Peace with Retirement Decision 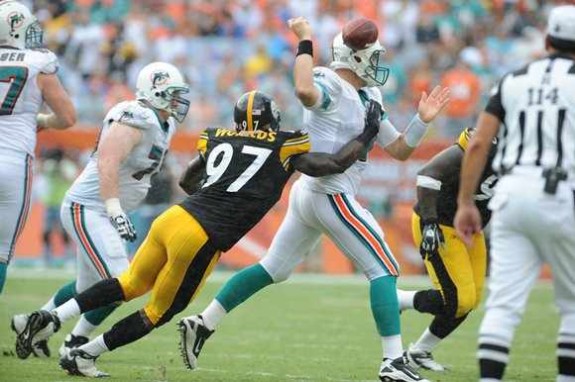 Well, that was fun, wasn’t it? The NFL’s very own version of March Madness began with a bang yesterday as players from Seattle to Miami – and everywhere in between – traded places and padded bank accounts on the first official day of free agency.

Along with the spate of players swapping one set of colorful laundry for another, a trio of early retirements garnered headlines yesterday as well. San Francisco linebacker Patrick Willis planned his exit well enough to hold a farewell press conference – though not well enough to properly secure his necktie – to cap off his eight seasons in the league. Often-injured Tennessee quarterback Jake Locker announced he was stepping away from the game at the age of 26.

And then there was the bombshell.

Rather than cash in on a free-agent market that would have likely earned him in the neighborhood of $8 million per year, former Steelers outside linebacker Jason Worilds walked away from football at the age of 27. In his five seasons in Pittsburgh, Worilds tallied 25.5 sacks (really the only statistic that matters for an outside linebacker who wears black and gold), 15.5 of them coming in the past two seasons.

Worilds, a second-round pick in the 2010 draft, parlayed a strong 2013 season into a transition tag and nearly $10 million in salary from the Steelers in order to keep him from hitting the open market a year ago. Worilds played reasonably well in 2014, but fans wanted more from a guy who entered the season as Pittsburgh’s premier pass-rusher. Whether it was Dick LeBeau’s defensive scheme or opposing offenses game-planning for him, Worilds seemed to spend more time in pass coverage last season than he did chasing down quarterbacks. At least that’s how it looked from my vantage point (also known as my couch).

The fact that Worilds is announcing his retirement now – when he was on the verge of cashing in on a big-money contract with any number of teams – is curious but also admirable. Worilds, Willis and Locker making the decision to leave the game behind while still in the prime (I know, I know…Locker didn’t really have a prime) of their respective careers should improve the quality of their lives in the long term.

We live in a world where many former NFL players are struggling with the lasting effects of subjecting their bodies to the repetitive and violent contact that comes with playing football at the highest level. I’m not interested in debating the salaries of today’s players in terms of the value of their health later in life. Players today make a lot of money. Nobody disputes that. But to guys who played 30 or 40 years ago and can’t walk without assistance or have trouble remembering the names of their family members thanks to the effects of chronic traumatic encephalopathy, all the money in the world isn’t going to make a difference.

Whatever the reason for Worilds not only removing himself from the free-agent pool but also leaving the game in his rearview mirror, he’s apparently at peace with his decision and ready to tackle the next phase of his life. I wish him the best of luck.