Big Ben to Have Big Year According to Publication 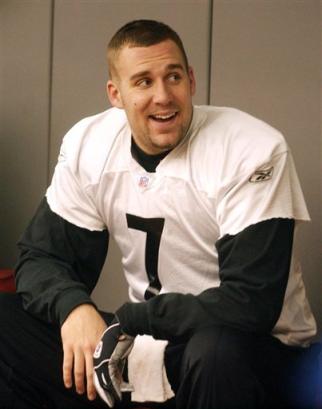 Everyone knows that if the Steelers are going to have a big 2007, it will have to be big as well for Big Ben Roethlisberger. Well, good news on that front, as at least one publication on the stands thinks that things will go Ben’s way in 2007. The Annual Street & Smith’s Pro Football 2007 Yearbook has broken down the predictions for all starting QB’s in the National Football League, and they have some solid numbers for Ben this upcoming season.

The pub picks Roethlisberger as the number 11 quarterback in the league, and says that this year Roethlisberger will throw for 3,499 yards, 21 TD’s and 18 interceptions. It says that Ben will attempt 455 passes, completing 268 of them. It also has him rushing for 77 yards on the year with one score. With the yards predicted, Ben will throw for 254.6 yards per game. Not bad.

Last season playing with a variety of issues, Ben was 280-for-469 for 3513 yards and 18 touchdowns to go along with 23 interceptions. He rushed the ball 32 times for 98 yards and two touchdowns. With a new offense in place that could take advantage of more 4 and even 5 wide out sets, and hopefully a healthy season and a better year coming from the offensive line, the Steelers and their quarterback should have a much better 07 than 06.

The QB Rankings from the magazine break down as follows for the top 11: