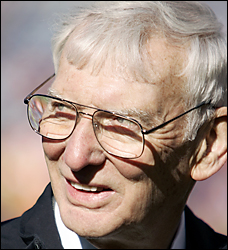 With nothing else to do, Michael Silver of CNN/SI felt the need to put together his list of who he feels are the best and worst owners in the National Football League. As usual, Steelers owner Dan Rooney was not given enough credit, as he was ranked 9th overall, behind such loudmouth, nagging owners such as Jerry Jones and Daniel Snyder. Silver explains his ranking of Rooney below:

“Last year I had Rooney ranked 10th, and many of you reacted like I’d just rated democracy as the 10th-best form of government. I’m pretty sure this year’s move up to No. 9 won’t prevent a similar response. Still, I’ll start with the positives.

Rooney is a great man who does his community and league proud, and we all know who knocked on Goodell’s hotel-room door to give him the good news last August. Best of all, Rooney resisted both conventional wisdom and the vehement urgings of his son, Art II, and passed over a pair of strong in-house candidates (Ken Whisenhunt, Russ Grimm) to succeed coach Bill Cowher, instead choosing 34-year-old Vikings assistant Mike Tomlin. Regardless of how well Tomlin does in his new job — and he’ll have time to grow into his role, thanks to Rooney’s legendary and commendable patience — we know now that the man who inspired the Rooney Rule truly is committed to advancing the causes of minority-coaching prospects.

OK, now for the not-so-perfect news: Rooney could’ve retained Cowher had he been willing to pay market value, but his frugal tendencies wouldn’t allow it, which is a recurring theme when it comes to Pittsburgh players. He also waited too long to force the issue, creating an obvious lame-duck situation that helped contribute to the Steelers’ squandering of their championship edge.

Finally, I’m thoroughly baffled that a boss with Rooney’s values would allow his offensive line coach (Larry Zierlein) to remain employed after the recently hired assistant forwarded a pornographic video clip (of a Britney Spears impersonator, by the way) to every high-level executive in the league and his/her secretaries. Ask yourself this question: If someone in accounting had done the same thing, would that person still have a job?”

How anyone can come up with such a ranking for Rooney is beyond me. For all he has done for the league, and for the Steelers in getting the NFL to be the sport it is today, Rooney easily should be in the top 5. As usual though, Rooney gets dissed based on the fact you don’t see him plastered on the sidelines each week acting like a fool like Jones, or getting involved in every aspect of the teams personal decisions, like Snyder. Nevertheless, Dan is still a great owner and should be revered as one by the rest of the league.