Reed and Sepulveda a plus for Steelers 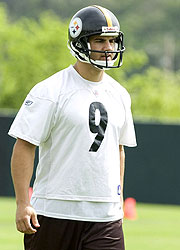 Everyone who knows anything about the Steelers knows that their bread and butter is their running game and their strong defense.  One area that has been overlooked has been their special teams – specifically their kicking game; in this case the kicker and punter.

Reed told Ed Bouchette of the Pittsburgh Post-Gazette that it was his mental approach, adding, “I’ve always been capable of that. Sometimes, I just get out there and try too hard.  I did that one kick and it actually worked out in our favor.  It could have gone out of bounds, the one that looked like a power squib.  But, I want to get more consistent.  I feel comfortable with field goals and extra points, even on kickoffs.  But I want to be more consistent everywhere.”

Meanwhile, punter Daniel Sepulveda only averaged 37.2 yards per punt against the Browns; however, 5 of the punts were downed and 1 was a fair catch, so situational punting worked well for the Steelers on Sunday.  The return game on the other hand, was a bit sub-par.  Newly signed return specialist Allen Rossum had some difficulty with his returns; he totalled only 7 yards on 2 punt returns and 44 yards on 2 kickoff returns.  Steelers head coach Mike Tomlin, sensing some optimism in the return game, told the Post-Gazette, “I would have liked to get Allen a little more room in some instances, but we’re a developing football team.  You can’t knock that performance.”

Tomlin has emphasized special teams almost since Day 1.  And from the looks of what Reed and Sepulveda did on Sunday, the extra work on that aspect of special teams seems to be working.  Only some tweaking of  the return game may be necessary in order to have an above-average special teams unit.