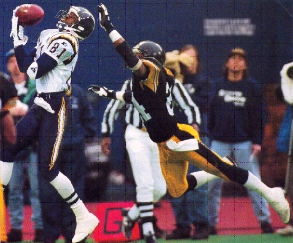 Chargers-Steelers games always bring up the worst memories for me. Yes for younger fans, you may remember the great Monday night win a few years back, but for those a bit older, you remember two painful Chargers-Steelers game. One of which was the 1982 AFC Tournament in which Dan Fouts came into Three Rivers against Terry Bradshaw and beat the Steelers with Kellen Winslow, and no, the dad, not the son.

But it was the game in 1994 that to me always will live in the depths of being the toughest loss I have ever endured as a Steelers follower. That 12-4 team was one of, if not the best Steelers team that I had ever seen. While there offense was nothing special (what else is new?), the defense was simply awesome.

Greg Lloyd, Kevin Greene, Rod Woodson, Chad Brown, Ray Seals, Brenston Buckner, Carnell Lake and others led that top ranked defense to the title game. They led the league in sacks, got turnovers in bunches, and made plays that to this day still make highlight films. If they would have went to the Super Bowl and/or won it, that D would still get props today.

Instead, it was that D in the end and their aggressive nature that let them down in the end. They dominated that Chargers AFC Title game at Three Rivers, yet Stan Humphries, in my opinion the worst starting QB ever in a Super Bowl, made two big plays to beat that D 17-13. If that D just would have made one more play, they would have been Super Bowl bound vs the Niners instead of home.

To relive that game again to this day is very hard. I recall quite well to this day Neil O’Donnell, like him or not, leading the team down the field in a final few frantic minutes, and getting the team within three yards of what would have been a winning score. O’Donnell set records that day, and while to this day many still hate him for the picks the following season in the Super Bowl, it was his play that day that almost won that game for the Steelers.

Tim McKyer. Do you recall his failures that day? If you don’t, let me remind you of the third-down play in which Humphries hit Tony Martin with what turned out to be the game-winning score, and McKyer got burned like toast. Martin made a great leaping catch, and the ball was put right in place by Humphries, who also got slammed by Chad Brown on that play, which also put a personal foul in place for the Chargers, but it didn’t matter.

It physically hurt to live through that game. All that emotion, all that effort as a fan, it was hard to watch that Steelers team fail on that rainy Sunday in early 1995. They should have won that game, and they should have made it to the Super Bowl. Tomorrow, some 13 years later, the teams meet again, and while thoughts of that game are long gone, I will never put totally away the pain of that loss.