Refs Say “Sorry” Over Last-Play Call that Was a Mistake 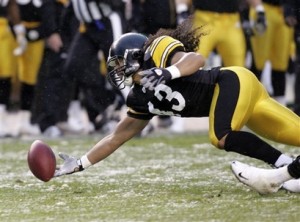 As was expected, the refs are saying “sorry” for the mistake at the end of yesterday’s Steelers 11-10 win over the Chargers. The apology was for the error at the end of the game, where the refs should have allowed the Steelers TD on the last play of the game when the ball was knocked away on a lateral by Steelers safety Troy Polamalu, who took it for what appeared to be a touchdown.

The refs, who on the day threw 13 flags against the Steelers to just two for the Chargers, huddled up before the team kicked the extra point. They at first said the TD was good, and the Steelers would be up 17-10 with an extra point coming. But then, they talked again, and for some reason came up with that the play should have ended because the Chargers threw an illegal forward pass.

Steelers coach Mike Tomlin was so irate about the refs and their calls, he refused to speak about it after the game in his post-game press conference, only to then say: “No, I have never seen a game ended with 13-to-1 in penalties, but I am not answering questions about the officiating.”

Dan Rooney and Son Set to Buy Steelers
Ward Talks About Hit on Rivers; Says He’ll Be Ready for Bengals