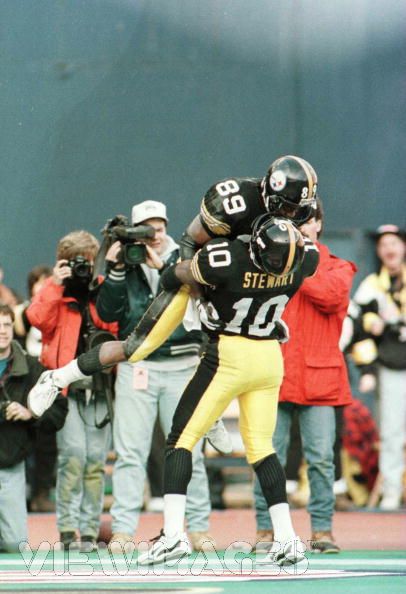 We all know that the Steelers have a rich tradition of big plays over the course of their history. From six Super Bowls to countless playoff games to huge wins, the Steelers are the most celebrated NFL team in history for a number of reasons. Today we continue our countdown of the “Top 10 Catches in Steelers History”. Today, we throw out Number 6. Be back tomorrow for Number 5:

The Steelers seemed doomed vs the Colts, much like one season before, when they blew a lead to the Chargers in the AFC Championship game at home. This time, they would not be denied. After making good on a 4th-and-3 play with the Steelers trailing 16-13, Neil O’Donnell went for the kill vs an aggressive Colts defense, and he looked deep for Ernie Mills, a wide out the Steelers had taken in the 3rd round of the 1991 draft out of Florida. Mills beat Colts CB Ashley Ambrose on the play, and hauled in a perfect pass from O’Donnell for 37 yards that set the Steelers up at the Colts one. Two plays later, Byron “Bam” Morris went in for the TD and after a failed Hail Mary pass from the Colts, the Steelers were off to Super Bowl XXX.