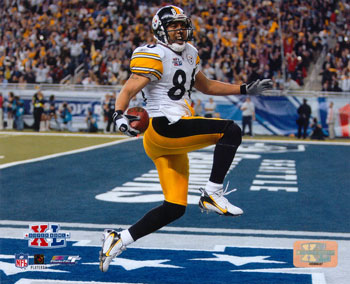 We all know that the Steelers have a rich tradition of big plays over the course of their history. From six Super Bowls to countless playoff games to huge wins, the Steelers are the most celebrated NFL team in history for a number of reasons. Today we keep going with our countdown of the “Top 10 Catches in Steelers History”. Today, we throw out Number 5. Be back tomorrow for Number 4:

There was no doubt that the Steelers had not played their best game vs the NFC’s best in the Seahawks in Super Bowl XL, but the team still lead 14-10, and this trick play in which saw Antwaan Randle El throw a perfect pass to Hines Ward, sealed the win with 9:04 left to play. The play was at first a wide receiver reverse, but the play turned out to be a pass play as Randle El, who played quarterback while in college ended up with the ball after back Willie Parker took a pitch from Ben Roethlisberger and handed off to Randle El, who was running in the opposite direction. Randle El then pulled up and threw the 43-yard touchdown pass to a wide-open Ward, giving the Steelers a 21-10 lead. It was the first time a wide receiver threw a touchdown pass in a Super Bowl, and started the celebration in the Motor City as the team finally had gotten that fifth Super Bowl win.