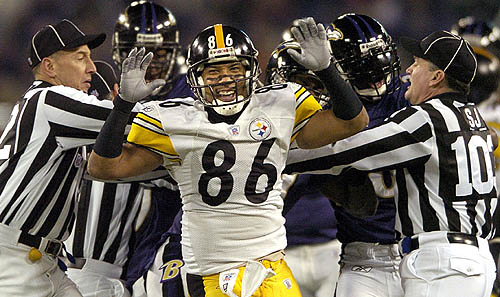 The Steelers official website has an interesting piece today about Hines Ward helping out the youth of the team, and also talks in detail about the Steelers lack of depth at the wide receiver position. Ward talks about the fact that if he or Santonio Holmes goes down with an injury, it will be up to a player like Limas Sweed or Mike Wallace to jump in and take over.

“We are thin at the wide receiver depth,” said Ward. “Mike Wallace, Sweed those guys are going to have to help the team and contribute. If myself or Santonio goes down, one of those guys becomes the starter. You have to make sure you understand and help them so they understand. They are next in line. Over the course of 16 games anything can happen.”

Ward is doing what he should to make sure these guys are ready to play, and unlike a lot of vets around the league that are trying to fight off a youth movement and keep their jobs to themselves, Ward knows that the Steelers won’t win another Super Bowl if other players don’t step up.

One player he talked about was second-year pass catcher Limas Sweed, who he spoke to at length after dropping a sure TD last year in the AFC Title game vs the Ravens. Ward says that Sweed seems to be coming around, and he’ll be counted on to be a factor in the passing game in 2009.

“Limas is making plays,” said Ward. “He has a better grasp of the playbook. Mike is still raw. He is still learning different coverages. Each day he is starting to see the game. That is an encouraging sign when each week they get better and better.”

This is a position that needs to step up, and at the end of the day, it’s great to see a future Hall of Famer like Ward doing his part to make sure that the youth of the Steelers are prepared to go out and make plays in 09 and beyond.

Roethlisberger Spends Thursday Rooting on “King” James and the Cavs
Dixon to Get a Shot to Make an Impact in 09?