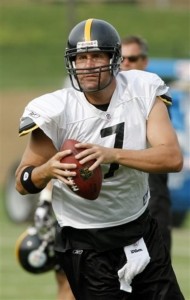 Ugh. Just when it seemed that camp would end with most of the Steelers walking away healthy, one of if not their biggest player is not walking away at all. Today in the practice session, quarterback Ben Roethlisberger injured his right ankle or foot during the last half-hour of the team’s final training camp practice.

Right now it’s not immediately certain how badly he was hurt or how long he would be out. Roethlisberger had an ice pack on the back of the ankle when he was carted off at the end of Thursday’s workout, with offensive coordinator Bruce Arians accompanying him. Roethlisberger didn’t talk to reporters, but he could be overheard saying, “Oh it just feels great. It feels like a car ran over it.”

Coach Mike Tomlin declined to talk to reporters. Team spokesman Dave Lockett said only, “Someone stepped on his foot, and we don’t have any updates other than that.” The injury seemed to take place after the starting defense, led by James Harrison, ran over left tackle Max Starks.

Starks went down to one knee as he tripped Roethlisberger, who stayed on the turf for about 5 minutes. He was limping noticeably as he gingerly walked from the sideline to join the end-of-practice huddle at midfield. He draped a towel over his head before leaving on the golf cart.

Normally, any player seriously injured during a Steelers practice is removed from the field immediately and is taken to a hospital—an indication that Roethlisberger’s injury may be no more serious than a sprain. Starks suggested such, saying, “My feet are fine. I don’t have a sprained ankle.”

Starks isn’t certain exactly how the two-time Super Bowl-winning quarterback was hurt, but he didn’t hear any popping or tearing noises as Roethlisberger went down, sounds that might signal a serious injury.

“James Harrison was bull rushing … I’m not sure I knocked him into him (Roethlisberger) or what happened behind me. I was busy trying to block the defensive MVP,” Starks said. “He got tripped up and fell down.”

Roethlisberger didn’t tell any teammates how he felt, though he could be heard saying, “I’ll be all right.”