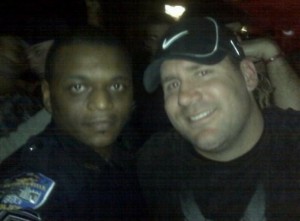 The case against Big Ben had some pretty hefty accounts filed against it today, as the Huffington Post reports that Ben’s bodyguards blocked the bathroom door where the alleged assault against the 20-year old accusing him took place:

Ben Roethlisberger’s bodyguards guarded the entrance to the bathroom where he allegedly sexually assaulted a 20-year-old college student, according to an eyewitness account at FanHouse. Another witness tells the web site that the Steelers quarterback looked “as surprised as anybody” when police arrived at the Milledgeville, Ga. bar later in the night.

A woman who claims to have partied with Roethlisberger the night of the alleged assault says the Steeler “was not nice.” She tells WTAE Pittsburgh that he “bought a round of shots for girls and said, ‘All you bitches, take my shots.'” The article reports that Roethlisberger “hit on her but she wasn’t interested and didn’t like the way he was acting, so she left.”

There’s also been reports that the QB posed for photos with the cops before the alleged incident, and that he has said yes to submitting to DNA testing. Roethlisberger has said there was contact with the 20-year-old, but that no assault took place.

OL Fraley inks with the Rams; Steelers had some interest
Foote finds his way back to Pittsburgh; Inks three-year deal