Around the North: An interview with Ravens Gab Editor Matt Jergensen 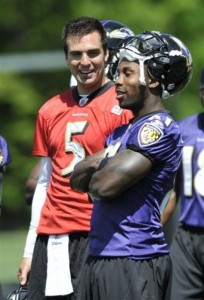 Here at Sports Gab Network, we have a real good staff of writers, and a couple good ones right here in the AFC North. So for the next couple days, we’ll catch up with some of our North bloggers, and today we chat with RavensGab editor Matt Jergensen, as he answers some questions about the rival Ravens:

1. What grade would you give the Ravens for their offseason to date?

I think they had a fantastic off-season.

They did a great job of addressing multiple needs and at least on paper are a much improved team from last season. The acquisition of Anquan Boldin finally addresses the need of a physical receiver who can get yards after the catch and they gave up very little to get him. They also added several new targets for Joe Flacco in Dennis Pitta, Ed Dickson and David Reed. The prospect of possibly drafting Dez Bryant was very intriguing but the trade with Denver was a no-brainer. Resigning Derrick Mason was nice insurance as well. If Joe Flacco is the real deal then he’ll prove it this season.

The Ravens also addressed needs on the defensive line in Terrence Cody and Arthur Jones and they may have the other pass rusher that they’ve needed to compliment Terrell Suggs in Sergio Kindle.

My only complaint is that they didn’t do much to upgrade the secondary. They committed too many penalties last season and it took almost ten games for Domonique Foxworth and Chris Carr to provide even adequate coverage. Hopefully an improved pass rush will help the corners but with both Lardarius Webb and Fabian Washington coming off of ACL injuries there are plenty of questions about how they will be able to perform in 2010. Most recently they signed Travis Fisher but he’s simply insurance. They still lack a physical shutdown type corner back.

2. Anquan Boldin was a huge pickup for the team, what do you expect out of him for his first season in Baltimore?

I would expect 80 catches for about 1,000 yards and 7 touchdowns if he remains healthy. He hasn’t played a full season since 2006 so I do have some concerns there. His playing style should fit in well with the offense and he should quickly become a fan favorite if he can produce and provide the offense with another viable weapon. Baltimore has been searching for the “#1 receiver” for years on the outside. It remains to be seen if it really address that need but it does give the Ravens improving offense another viable option.

Early in 2009, Flacco spread the ball around and had the offense clicking at a rate fans had never seen before. However, things changed as defenses adjusted. During the second half of last season Flacco regressed in some ways and would lock in on Derrick Mason or simply check down to Ray Rice.

Boldin is another player defenses must account for in their game plan.

3. Your thoughts on OLB Sergio Kindle, the team’s first draft pick this year, what will he bring to the table, and how much playing time will he get in year one?

If his knee is fine then this was a huge steal in the second round. On many boards he was one of the top three outside linebackers available. He possesses speed, a knack for getting to the quarterback and he can hit. He also has a bit of a colorful personality and made his claim to rookie of year just after getting drafted. Of course that talked died down after he met with the team during its first mini-camp and he backed off of those statements. During that first camp he was running around with no limitations and the staff was impressed with his mobility.

Currently he’s being penciled in as the back-up to Jarret Johnson. I could see him on the field during rushing downs and most likely on Special Teams. The Ravens seem to switch back and forth between a 3-4 and 4-3 alignment although Greg Mattison seems to favor the latter. If so, then perhaps Kindle could see more time as he competes with Dannell Ellerbee and Tavares Gooden for the linebacker spot on the opposite side.

4. Ed Reed had hip surgery, how much do you expect that to affect him? Will he miss a lot of training camp?

Reed has been playing in pain for the past two seasons with a nerve impingement in his neck. As a result I think every season you have to wonder if it will be his last.

The hip injury last season caused him to miss four games in December but he did return for the playoffs and was able to play well. Later that week he had stated that he would have to weigh his options to decide if he would return. It was confirmed by several sources that he had the surgery which to me means that he plans on playing in 2010. He is expected to miss at least some of training camp but how much is still unknown. His teammates and Head Coach John Harbaugh all expect Reed to be back and ready for the start of the season but I think the only one that can really answer that question is Reed himself.

5. The defense had some up and down moments last year, are they getting older? Is there a plan in place to replace some of the players getting near the end of their careers?

Early in the season the defense had its struggles as they had to adjust to Greg Mattison’s “Bend but don’t Break” style of defense. He’s a much more conventional defensive coordinator and that’s a major break from the schemes Rex Ryan would devise. The defense was much more effective during the last two months of the season and finished 3rd in the league in points allowed (16.3) as well as 3rd in Total yards allowed (300.5).

A major area of concern was the lack of a consistent pass rush. For the third straight season they finished in the middle of the pack in quarterback sacks. Terrell Suggs signed a huge contract and proceeded to come into camp out of shape producing his worst season as a pro. Long time vet, Trevor Pryce led the team in sacks but age has made him a situational player.

The core of the defense is getting older. Trevor Pryce re-signed but he’ll most likely retire next season. Kelly Gregg will be in his second year removed from micro-fracture surgery and he’ll be 34 so this season will determine how much he has left. Of course the centerpiece, Ray Lewis continues to produce and registered his highest amount of total tackles (133) since 2004. But his career is winding down and if he stays injury free he could play another two seasons. Ed Reed I addressed earlier so you do have the possibility that over the next two seasons several long-time pieces of the defense will no longer be there.

Over the past few seasons the team has sprinkled in youth among the core players. The defensive line added several young players in Terrence Cody, Arthur Jones and the biggest concern for next season will be resigning Haloti Ngata to an extension who only turns 26. Second round pick from 2009, Paul Kruger has bulked up to 270 and will look for time as a pass rushing defensive end to perhaps eventually replace Pryce.

They have plenty of youth to provide depth at linebacker (Kindle, Ellerbe, Gooden, McClain, Barnes) but I don’t see any of them replacing Ray Lewis. When he does finally retire the Ravens will have to decide if they want to draft an inside linebacker or sign a free agent to fill the void but they should have at least a season of two to decide.

Second year man Tom Zbikowski was solid stepping in during Reed’s absence and fellow safety Haruki Nakamura should be back from a broken right ankle. Strong safety, Dawan Landry rebounded after a slow start returning from a neck injury. Third round pick Lardarius Webb became a starting corner mid-way into the season before his injury.

It’s been a long process but the Ravens have gotten younger at most of their positions but for some it remains to be seen how much of an impact they will have.

6. Donte’ Stallworth was a bust in Cleveland, then hit and killed a man, what impact can he have with this team?

The debates raged on in Baltimore after the Ravens signed Stallworth to a one-year contract. Some fans felt the team should stay away from him and others felt he might be able to help provide a deep threat. My feeling is that he served his time, paid restitution to the family in the civil suit, and was reinstated by the league. John Harbaugh was familiar with Stallworth from his stop in Philadelphia in 2006 and the front office felt comfortable with him. So the question of whether he should be allowed to earn a living is up to people’s own interpretations.

As far as his impact on the team is concerned, at the very least he provides competition to a stagnant receiving corps. Mark Clayton and Demetrius Williams will be back in camp vying for spots but both have been disappointments. If he can prove to still be a viable option he’ll push one or both off the team.

The Ravens have needed a player to stretch the field on a consistent basis and maybe Stallworth could fill that role. But even if he doesn’t work out, Stallworth was only a one year low risk – possible high reward signing.

7. Will former Seahawk DE Corey Redding be a force on the Ravens D-line in 2010?

I’d like to think so. He was an intriguing signing by the Ravens this off-season. He replaces Dwan Edwards who got the majority of the snaps at defensive end once Trevor Pryce was moved to situational downs. Honesty I wasn’t really that upset to see Edwards go as it took him several years to develop and while he became an adequate run stopper he never generated much pressure. I think the Bills overpaid. So I do see Redding as a major upgrade over him. It appears that the team will move him around on the line with the hope he can get to the quarterback. In this defense he may have a real opportunity to really blossom.