Around the North: An interview with Browns Gab Editor Randy Ward 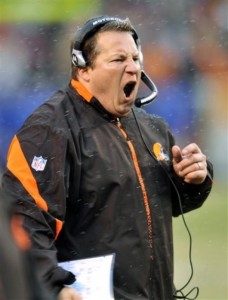 Here at Sports Gab Network, we have a real good staff of writers, and a couple good ones right here in the AFC North. So once again we have an interview with a North blogger, today it’s Randy Ward, our Browns Gab editor, as he answers some questions about the rival Browns:

1. The Browns took CB Joe Haden with their first pick in round one. Most say they really wanted safety Eric Berry. Was Haden the 2nd choice for the team?

The Browns were really high on Eric Berry and would have loved for him to play safety for them for the next ten years. I really think Cleveland wanted Bradford first and foremost. They weren’t able to land Berry or Bradford so Haden was a great fit for the team. Now we have two Cornerbacks who can play football and not have to worry about that position for years to come. With the addition of Sheldon Brown it is a perfect fit for Haden and the team with Brown mentoring Haden. The teams secondary has been a weakness on the team in years past and now could be a strength for the Brown and Orange in 2010. Also with Anquan Boldin and Antonio Bryant coming to the division you will need a strong secondary if you think you are going to compete in this division.

2. The club brought back Eric Mangini but added Mike Holmgren as Team President. If the team struggles early in the year, could Mangini be shown the door and Holmgren take over as coach?

Coach Mangini is on the hot seat with about 50% of NFL coaches. If he doesn’t win early the speculation will begin that he is going to get fired and lose his job. I think this team went through its growing pains in the middle of last year and have turned the corner. The team plays hard and doesn’t quit for the Coach and if that is the same as last year I don’t see Mangini getting fired until the end of the year even if the team did struggle early. Holmgren won’t coach the team this season if anything it would go to a coordinator and possibly Holmgren next season. I don’t foresee The Browns struggling early and believe they will win some games next season so Mangini should be the coach for years to come. Mangini has a lot of pressure off of him with Holmgren and Heckert here in town. He just has to worry about coaching the team and winning. He is a good football coach and people around the division will see that this year.

3. Jake Delhomme was brought in to play QB at $7 million a year, they also traded for Seneca Wallace, and drafted Colt McCoy in round three. What’s the long term plan at QB?

The long term plan at Quarterback is Colt McCoy. The Browns are hoping they got a player who can play the position here in Cleveland for years to come. I think the plan they want to happen is Jake Delhomme showing the NFL that last year wasn’t the type of Quarterback he is and that he still has some gas in the tank. Delhomme is a leader and that is what this team has needed at Quarterback since 99. Delhomme is here to be a bridge for the future as the Quarterback position for this team. I think if it works out according to plan it will be Delhomme for the next two seasons at Quarterback with Wallace having a role in the offense with Cribbs. Imagine Cribbs,Wallace and Delhomme on the field all on one team, Defensive Cordinators are having nightmares trying to scheme against that. With Colt McCoy taking over as early as next season or in two years when Delhommes contract is up.

4. The team won their last four games last year after starting 1-11. What was the reason for the sudden turn around? Do you think that success will carry over into 2010?

I think the reason the team turned it around last year is that they didn’t quit on Coach. They played through the growing pains and were able to establish their identity as a run first football team. The team ended the season with four straight wins after starting the year 1-11 which hardly ever happens in the NFL. This team showed that they want to win and will do whatever it takes to get a win. The winning streak started against the Steelers here at the stadium and they probably shouldn’t have won that game. Pittsburgh had much more talent then the Browns did at the time but they didn’t quit and showed Pittsburgh this team is a different team since they have been back. Mangini has this team on the up and coming and without a doubt the success of last year will carry over into this season. The success at the end of last year carried over to March, where there has been great participation in the offseason activities which in turn carries over to OTA’s and then to Mini-camp. The Browns are going to have success this season.

5. What’s the biggest area the team improved on in free agency and the draft? What positions are still a concern?

There are two areas the Browns improved on the most this offseason. First and foremost is the secondary with the addition of Sheldon Brown, Larry Ashante, T.J. Ward, and the first round pick Joe Haden this team has added a lot of young talent. Sheldon Brown brings experience and still has a lot of football left in him. The Browns defense got a lot better with the addition of all these guys. Another position this team got much better at is the Quarterback position. Now you have Delhomme, Wallace, and McCoy as your top three Quarterbacks. Last year it was Quinn, Anderson, and Ratcliffe a position that struggled all of last season. I think a position of concern would be the wide receivers. The team is very young at the position and doesn’t have a number one receiver that is going to bail them out like the other teams in the Division. I also think the running back position is a little unclear, everyone wants to see how Harrison is going to follow up last season. Although there is more depth at the running back position then the wide receiver position.

6. What’s your prediction for wins for this team for 2010 as of right now?

This football team is going to be competitive all season long. There will be some games where the Browns are going to have to make a play to get the win. We need to start off 2-0. Going on the road to Tampa and home against the chiefs we need to win both of those games. I think a good goal for this team would be to go 4-2 in the divison. I think it is time for the Browns to take care of the Steelers in Pittsburgh and at home. I think the division is going to be tough for the Browns to win with the Ravens being the favorite but they still have question marks. The Bengals are a team nobody knows what to expect from and the target is going to be on their back with winning the division last year. The Steelers are in trouble and I know I am going to catch a lot of heat for saying that on Steelersgab.com but that team is aging and has no true direction on the field. Hines Ward is ready for the glue factory, Big Ben has had another eventful offseason and the Quarterback play is going to hurt them all season long. The Browns ended the Steelers season last year and look for them to put the Steelers in the basement in Week 6. Sorry Steeler nation but the Browns are going to sweep you guys this year and go 10-6. That might not be enough for a Division title or even a Wild Card birth but it will be a success for the city of Cleveland and the Browns organization. I also predict the Steelers to win 5 games and struggle all season. Tomlin will be on the hot seat and fired before Eric Mangini in 2011.

7. The team has a number of restricted free agents that have not signed, why?

The Browns do have a number of restricted free agents that haven’t signed and that is on the business aspect of the league. The Browns have a core group of guys who didn’t attend Ota’s this past week. Mangini said he has talked to all of them and expects them to be in camp soon. I would say the biggest reason these guys aren’t in camp is because of their agents. These players all want to play for the Browns but want a long term deal. Some of them deserve it, for example Lawrence Vickers who has played well over some years. These guys will be in here because they don’t want to take the pay cut if they don’t sign the tender. The Browns needs all of these restricted free agents to have good years and then they can become unrestricted free agents and cash in.

Would a New York Super Bowl open the door for one in the Steel City?
Current Steelers on Twitter