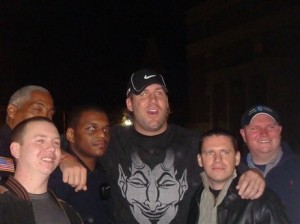 WPXI is reporting that authorities will be releasing the DVD collection of the Ben Roethlisberger sexual assault case. Now you won’t be able to get them at your local Blockbuster, but if you want to fly to Georgia to check them out, be my guest.

According to WPXI reporter Rick Earle, authorities in Georgia will release more than 50 DVDs containing audio and videotaped interviews and photographs from the prior investigation into allegations that Ben Roethlisberger sexually assaulted a 20-year-old college student on Wednesday. On the DVDs are photos from inside the Capital City Club in Milledgeville, where the woman told police she was sexually assaulted by the Pittsburgh Steelers quarterback, Earle said.

Police made an audio recording of the accuser’s first interview and videotaped her second interview. WPXI plans to air both interviews, along with the questionings of other college students who were with the accuser, as well as those who were in Roethlisberger’s group, those interviews include fellow Steelers player Willie Colon and one of Roethlisberger’s body guards, Pennsylvania State Police Trooper Ed Joyner. The district attorney ruled there wasn’t enough evidence to file criminal charges against Roethlisberger and closed the case, but under Georgia law, investigators are required to release evidence gathered in the case.

The Roethlisberger investigation DVDs are being made available through the GBI’s Open Records Unit and will be released at 10 a.m. in Milledgeville, Ga.