Would the Steelers Even Think About Terrell Owens? 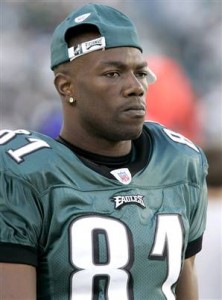 The Steelers have some issues at the WR spot, I think that is something we can agree upon. But the thought of the team making a rather unlike Steeler move and getting a player like Terrell Owens scares me to death.

With Super Bowl 43 MVP Santonio Holmes long gone and Super Bowl 40 MVP Hines Ward not getting any younger, the Steelers would benefit from whatever T.O. has left in the tank.

If Owens wants to join a contender and get a shot at a Super Bowl ring, maybe Owens would drop his asking price for a chance to play in Pittsburgh. But the Steelers have to be willing to take a chance on a guy with a checkered past, and given their quarterback with a checkered present, it’s probably too much of a risk.