Scouting the Enemy: #7 in the AFC – Houston Texans 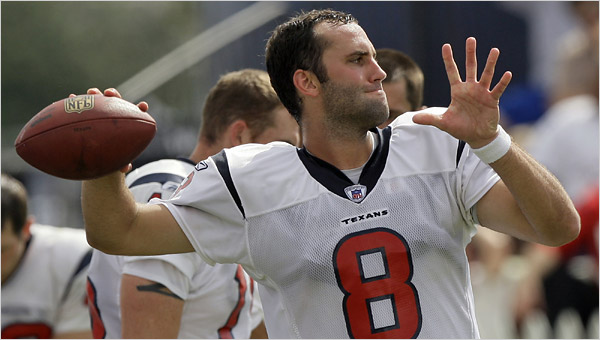 The Good – They are setting up to have an explosive offense in 2010 with QB Matt Schaub and WR Andre Johnson being at the forefront. Their run game has to come through if they are finally going to make the playoffs, and Steve Slaton and rookie Ben Tate have to step up for them. On defense, they have a good 1-2 punch with Mario Williams and DeMarco Ryans.

The Bad – The defensive front four isn’t as good as the LB’s, and it’s a big season for 4th year pro Amobi Okoye. The defensive backfield lost franchise CB Dunta Robinson, and will be tested by good QB’s. Schaub threw 15 picks, and if you can pressure him he will make mistakes. Johnson is great when healthy, but the other WR’s don’t scare many teams.

Steeler Connection – No matchups with the Steelers again in 2010, and unless the two teams find their way to the postseason, they won’t be seeing each other till at least 2011. The Texans can help the Steelers as they play the Ravens December 13th at home in a Monday night matchup.

Scouting the Enemy: #8 in the AFC – Miami Dolphins
Dixon’s Agent Not Sure Why QB is Behind Leftwich on Depth Chart