Preseason Game One: What to Watch For 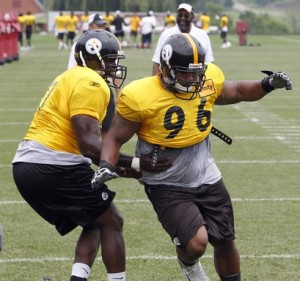 Tonight at Heinz Field the Steelers will have their first test of the preseason. They will do battle with the Detroit Lions, and the starters will play only about 8-12 plays. Below are a few things to look for tonight’s game between the Steelers and Lions.

1. How Does Tomlin Handle the QB Rotation?

This seems to be the biggest storyline entering Saturday’s contest. Does Tomlin allow Roethlisberger to take the field? Leftwich appears to still be well on his way to being the opening day starter, so it would make sense to have him go for the first in the preseason opener. Then again, letting Roethlisberger start would show the fans and club long term who will be the guy. Interesting decision.

First round pick Maurkice Pouncey has had a solid first camp, and it will be interesting to see him against another team at the right guard spot. Rookie linebacker Jason Worilds has been hurt a portion of camp with a hamstring, so I would think he is unlikely to do or play much. Another player people want to see is RB Jonathan Dwyer, who has also had a very up and down camp, at time slamming his helmet in disgust. Rookies are always the talk of camps, so watching the Steelers rookies go at it will be fun for the first time.

Tomlin said that Stefan Logan will start the game as the team’s return specialist, but he will also use rookies Antonio Brown on punt returns and Emmanuel Sanders on kick returns. There’s also a chance we could see the return of veteran Antwaan Randle El as a return specialist against the Lions. It’s a position to watch, as Logan had a record setting year, but his inability to break one has the spot up for grabs.

More so from the CB spot, as we know that Ike Taylor is going to be one corner, and right now Bryant McFadden, back from the Cards, is the other. After that there is an interesting battle going on, as the team has players like William Gay, Anthony Madison, Crezdon Butler, and a few others going at it for playing time. The secondary was one area of the defense that wore down late in games last season, so Saturday will be the first step towards changing that.

3rd Pick in the National Football Post Fantasy Football Draft Tonight – Who Should I Pick?
Preseason Rewind: What We Learned From Saturday Night’s 23-7 Win