Preseason Game Three: What to Watch For 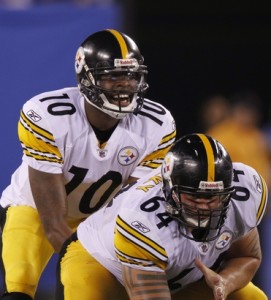 Hard to believe we are already at game three of the preseason, but so it is, as the Steelers will be in Denver to play the Broncos, a team they took care of on Monday night football at the same venue a season ago.

The Steelers have been solid in two preseason wins, while the Broncos have dropped two preseason games to the Bengals and the Lions. Here are some things to look for this week as the Steelers look to remain perfect in the preseason.

1. The QB Derby Heats Up

All indications are Dennis Dixon will get a very long look in this game, and could even get the start from all indications. The Steelers have a big decision to make as to if they go with the hot hand in Dixon in the season opener, or keep with their original plans and stay with Byron Leftwich. It’s not that Leftwich has been horrible, and he even had a big play with a long TD pass to Mike Wallace in the win last week. Right now though Dixon is clearly playing better than the veteran, and it will be up to the coaching staff as to who they feel better going with in game one September 12th vs Atlanta.

The biggest story in camp this week was by far the switch at the center spot between Maurkice Pouncey and veteran Justin Hartwig. The first round pick in Pouncey will have his hands full this week with former Charger NT and now Bronco Jamal Williams, and if he can handle himself against the former All-Pro, it will just cement his spot as the center for this football team. As for Hartwig, he could be looking at his last two games as a Steeler, as it would be tough for the club to pay him $3.7 million to be the backup center. The future appears to be now with Pouncey, and that fact could be set in stone with a good showing Sunday night.

Isaac Redman, the second-year undrafted back from Bowie State, turned heads last season in preseason, but never got to see the field in the regular season. He’s trying to make sure that won’t happen again in 2010, as he’s playing at a high level and is one of the players stepping his game up for increased playing time. The Steelers should have given him the shot late in the first half from inside the 5 instead of Mewelde Moore, and maybe they will think that through a bit more this week. Redman is running well in the open field as well as picking up the blitz as a blocker and catching passes out of the backfield. He has been the surprise player of camp to this point.

4. Who will handle kickoffs?

The team had such an issue last season with covering kicks, and this year they may try a different approach, that being not allowing the return man to take back the kick at all. With that, the club gave a shot last week to punter Daniel Sepulveda to handle the kickoffs, and in five kickoff returns the Giants averaged just 17.4 yards per return.

Compare that to week one at home vs the Lions when Jeff Reed handled the kickoffs, and Detroit put up 23.3 yards per return including a 33-yard return. Word is Reed isn’t happy about being taken off kickoffs, but if the Steelers can pin teams back and not allow big returns, it makes them that much better of a football team.

5. Can the D Continue Solid Play?

The defense has done a nice job the first two preseason games, allowing a total of 567 yards and 36 first downs in the two contests against the Lions and Giants. They seemed a little sluggish to start in the rain vs Detroit, but finished well and then last week vs the Giants played much better in holding NY to 3-for-10 in third downs and QB Rhett Bomar to a QB rating of 54.5. The D took a beating offseason about how they wore down in the 4th quarter of games, and while it’s preseason, it’s good to start the reverse trend of that now.

Poll: Do you think the Steelers should cut veteran Justin Hartwig?
All three QB’s will see time with the first team Sunday