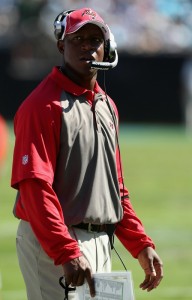 Two games, two wins. That and a number of injuries is the story of the 2010 Steelers as we head into this third weekend of the NFL season. The team will go with Charlie Batch Sunday, and will be without starting OG Trai Essex while it looks like Max Starks and Casey Hampton will both be back on the positive front.

They are favorites for the first time in 2010, and with a win they would stay up top the AFC North. With that, here’s the keys to a win in Tampa vs the Bucs Sunday.

1. Mistake free on offense – Last week the defense had to collect 7 turnovers in Tennessee, and STILL only won by 8, which when you think about it is kind of unheard of. This week they have to be mistake free and not give the Bucs short fields to work off of. In the first two wins, the Bucs each game have collected three turnovers in their favor vs the Browns and Panthers. Call me crazy, but I would rather see Batch throw for 25 yards again than have three picks.

2. Watch Winslow – Bucs TE Kellen Winslow is someone the Steelers know well from his years in Cleveland, and it seems he has fit in nicely in his couple years in Tampa. He leads the NFC in third down catches for first downs, and he’s Josh Freeman’s safety valve that he will look too in the face of the Steelers blitzes. It could be up to either a LB or Troy Polamalu to make sure they keep Winslow in check.

3. Make plays on offense when you can – It’s no secret the Bucs are going to try and load up the box and force Batch to make throws, and those chances will come early and often. The key will be to make sure they take advantage of those chances, and not waste them with drops and penalties. It’ll be up to players like Hines Ward, who had just one catch last week, and Mike Wallace to catch passes when they come their way, and even for Heath Miller to make sure plays are made when Batch finds him. There’s no question a couple drops or penalties will make it that much tougher to move the football.

Prediction – The Steelers are the better team, but the Bucs have confidence winning their first two games and QB Josh Freeman is playing well. The Steelers D won’t be so nice to Freeman, and will force some mistakes and some turnovers as well. It’ll be another hot day, so a note to Flozell Adams – drink water now! Anyway, let’s hope that Batch can make some plays, and Rashard Mendenhall will be the workhorse in the run game. I have a hard time thinking the Bucs will have the plays in them to pull this out, as the Steelers will go to 3-0 ready for the Ravens at home next week. Steelers 20 Bucs 7