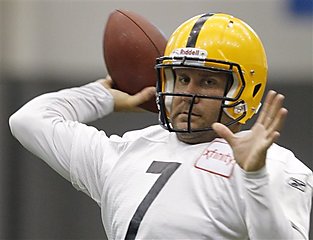 It was a good day for the Steelers franchise QB, as Ben Roethlisberger from all accounts was sharp and in sync with his wide outs in his first practice with the Steelers Tuesday.

As far as coming back as the starting QB, Mike Tomlin made it official right away that Roethlisberger is the man.

On his first pass Roethlisberger hit Mike Wallace deep, and continued to be sharp after that. “It was a good step, and I don’t think it’ll take as long as I thought,” Roethlisberger said.

The team should have more than enough time to get their QB and others on the same page, and they will have the bye this week and not have another game till Oct. 17th at home vs Cleveland.

Ben’s Back; Steelers QB back with the franchise after suspension
Hoke and Essex focusing at Browns game for return