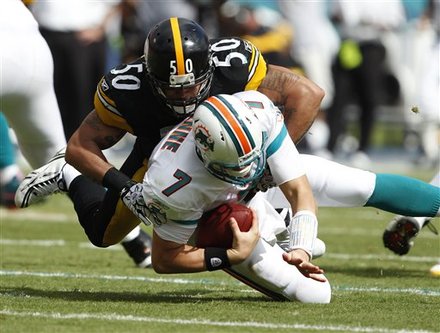 The ruling allowed Jeff Reed to kick an easy 19-yard field goal to give the team the one-point win and keep then in first place in the AFC North.

Roethlisberger was 19-for-27 for 302 yards with two touchdowns and a QB rating of 132.0. The Dolphins could have put the Steelers way behind the 8-ball early in the game as the Steelers had two turnovers the first two times they had the ball, but Miami only managed two field goals to lead 6-0.

Miami got a late TD as Chad Henne hit Davone Bess with a 26-yard score to make it 17-16 at the half.

Both teams kicked field goals in the second half, as Dan Carpenter’s 40-yard field goal with 5:17 left make it 22-20. Emannuel Sanders took back the kickoff to the Fins 48, and the Steelers drove from there for the game winner.

The Steelers travel to New Orleans to play the Saints next week on Sunday night Football. The Saints lost to Cleveland Sunday 30-17.