Game Eleven: Not Easy, But’s it’s a Win – Suisham kicks the Steelers to a 19-16 OT Win over Buffalo 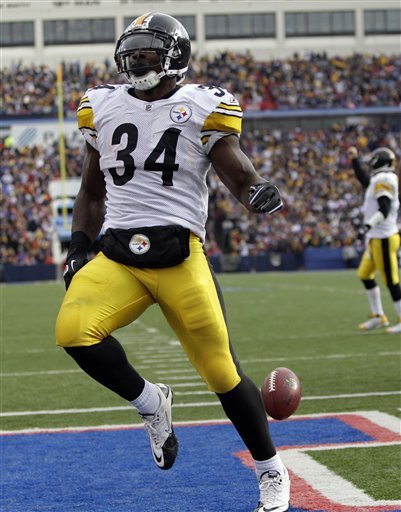 On a day when it seemed like it was going to be a walk in the park in Buffalo, the Steelers dominated for 30 minutes, fought for their lives for the second 30 minutes, and survived what many say should have been defeat in the final 11 plus minutes.

Shaun Suisham, the guy who made Jeff Reed unemployed two weeks ago, nailed a 41-yard field goal with 2:14 left in overtime to secure the Steelers most gut wrenching win of the year, 19-16 over the Bills.

The game looked over a couple times in OT as the Bills, now 2-9 had the game won when wide receiver Stevie Johnson got in behind the Steelers secondary but dropped a 40-yard pass on the run, while he was 2 yards into the end zone.

Buffalo got into Steelers territory twice in OT, but the first time punted and downed it at the Steeler four. On third down Ben Roethlsiberger was sacked, and almost lost the ball, but the Steelers recovered it and punted.

The Bills fumbled the punt, but recovered, and got again to the Steelers 39, but instead of trying a 56 or so yard field goal, on 4th and 9 they punted.

The Steelers got the ball on the 20, and marched from there to the Bills 22 with the big play being a Roethlisberger to Mike Wallace 17-yard pass on 3rd and 8 from the 22.

They got a huge day from Rashard Mendenhall, who had a career-high 151 yards on 36 carries. Eight runs between he and Issac Redmen got the Steelers in position for Suisham to try and make the game-winning field goal.

Pittsburgh dominated the first 30 minutes, going up 13-0 after a Mendenhall touchdown run and then two Suisham field goals, one of 45 yards and the other of 46.

The Bills did nothing in the first half, but another questionable personal foul on James Harrison in the third quarter opened the door for Buffalo.

A “leading with the crown of his helmet” penalty was called on Harrison on Bills QB Ryan Fitzpatrick, and then three plays later Fitzpatrick hit Fred Jackson for a 65-yard TD that cut the lead to 13-7.

Rian Lindell kicked two field goals to tie the game at 13, but then the Steelers went on what appeared to be a game-winning drive that ended with a 48-yard Suisham field goal that made it 16-13 with 6:19 left.

The Bills drove, but Fitzpatrick was picked by Troy Polamalu at the Steelers goal-line that appeared to save the win. Again though a penalty (holding) on Chris Kemoeatu stopped what would have been the play to clinch the game on third down, and the Steelers had to punt.

Buffalo got in field goal range at the buzzer, as Lindell hit a 49-yard kick to tie the game and send it to OT.

The team is now 8-3, and next week is their critical game of the year, as they play on Sunday night on the road at Baltimore.