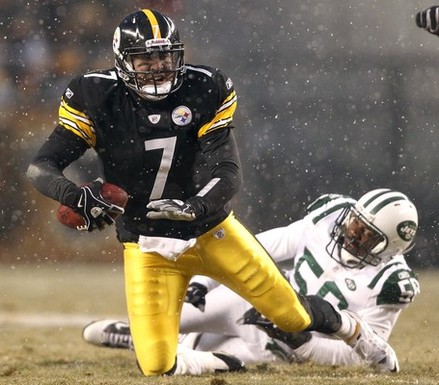 With Troy Polamalu and Heath Miller in street clothes, the short-handed Steelers simply ran out of time in the end, falling to the New York Jets 22-17 to fall to 10-4 on the season.

The loss, the first ever to the Jets in Pittsburgh, ties the AFC North with two games left with the Ravens, who beat the New Orleans Saints at home Sunday 30-24. The Steelers though do control their own fate, as if they beat the Panthers Thursday at home and win in Cleveland in January 2nd, they will win the division no matter what the Ravens do in their final two games at Cleveland and vs Cincinnati.

The Jets overcame a third quarter 17-10 deficit, and took a 22-17 lead with 2:38 left when Jason Taylor tackled Mewelde Moore in the end zone for a safety. The Steelers had their shots though, as they got the ball back with 2:08 left and one time out.

They drove to the Jets 10 with :09 left. After a Ben Roethlisberger spike, his next two passes both appeared to be intended for backup TE Matt Spaeth, but both fell incomplete, sending the Steelers to their 4th loss of the year.

The Steelers allowed Mark Sanchez to scramble for a game-tying touchdown after going up 17-10 on the first drive in the third quarter. Then Nick Folk kicked a field goal with 10 minutes left to make it 20-17. They got a safety late to end the 12 straight points to win the game.

Roethlisberger and the offense had their shorts, starting at their own 8-yard line. The QB ran 22 yards for a first down and completed passes of 29 yards to Emmanuel Sanders, 18 yards to Mike Wallace and 16 yards to Antonio Brown to take the Steelers to the New York 10. But his throw to tight end Matt Spaeth in the left side of the end zone with zeroes on the clock wasn’t close to being completed.

The Jets were led by Sanchez, who ran in a score and was 19-for-29 for 170 yards. He was only sacked once, and made some big throws on third downs when the Jets were driving for the tying and go-ahead scores.

“It was a tough, hard-fought football game. There weren’t enough significant plays there particularly at the end to be victorious. You have to tip your hat to the Jets. They made significant plays to win and of course we didn’t,” Mike Tomlin said. “How we respond to this will be important. We are in the thick of things here.”

The Steelers will have a quick turnaround, as they play Thursday night at home vs the Panthers, who are 2-12.