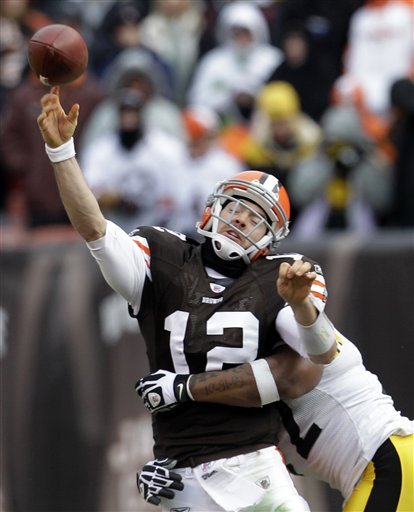 After laying an egg in Cleveland last December, the Steelers made sure this time with a lot more riding on it, they would not have any questions about losing to the Browns.

Needing a win to make sure they walked away with the AFC North title and a first-round bye, the Steelers laid out the Browns, winning easily 41-9 with most of the starters leaving the field with about 5 and a half minutes left in the third quarter.

The win means the team will get the bye week they wanted, and then will host an AFC team on either Saturday, January 15th or Sunday, January 16th at Heinz Field.

“I’m not surprised,” Steeler LB Larry Foote said. “We had more to play for. They talk about going out with a good game, but the truth is their cars are packed up, they’re on the last month of their lease. We had more at stake.”

The win was as dominant as any this year, as they started fast, building a 14-0 lead after one quarter, and then going into the locker room in the half up 31-3.

They scored on their first offensive play when Ben Roethlisberger hit WR Mike Wallace with a 56-yard TD just :43 seconds in, and the offense was off and running from there.

Other than a short Phil Dawson field goal for the Browns :17 seconds into the second quarter, and a garbage TD in the fourth, the Steelers crushed them on both sides of the ball. They scored four touchdowns (two Roethlisberger passes, two Rashard Mendenhall runs), and got a 41-yard field goal from Shaun Suisham to make it 31-3 at the break.

The Steelers got the ball to start the second half, and Roethlisberger allowed someone else to throw a score, as Antwaan Randel-El threw a short 3-yard TD to Hines Ward with 7:18 left in the half to make it 38-3. They added another field goal to put them at the final total of 41.

It was the most points Cleveland had allowed this season, the highest total before that was the Steelers first win over the Browns in October when they scored 28.

Mendenhall had just 36 yards on 14 carries, but two scores. Wallace caught three passes for 105 yards and a score, and Heath Miller and rookie WR Antonio Brown each had five catches.

So now the team will get a much needed rest. Polamalu, Roethlisberger and the vets get some time off to heal up, and hopefully that will also mean the return of Aaron Smith to the already very solid defense when they take the field in about two weeks.