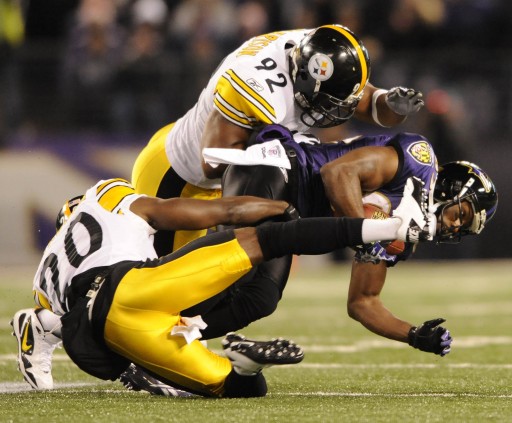 It’s time. For the third time in the 2010 season, the Ravens and Steelers, two bitter rivals, will do battle. This time though there’s quite a bit on the line, as the teams battle for a trip to the AFC Title game against either the Jets or Pats next Sunday. These two teams both won on the other teams field this year, and they are both playing well entering Saturday. Here’s our three keys as well as a final prediction for the matchup.

1. Fast Start – The Steelers have one big advantage over the Ravens, and that is they have had two weeks to sit back, watch games, and do nothing but wait. They haven’t had to travel, play a 60-minute game against anyone, and work preparing for two teams. In divisional games past the Steelers have usually done a good job jumping on teams and getting leads. At home they need to do that again, and beat on the Ravens early and often to get a two score lead.

2. Win the Turnover Battle – Sounds easy, and in this series, a big play and getting a turnover can go a long way in deciding the outcome of these games. If you don’t agree – remember the game December 5th? How about the AFC Title game back in January of 2009? Those games both had a huge turnover the Steelers way, and the Steelers won them both. It would be a bad day for Big Ben to go back to throwing picks, and for Rashard and co. to fumble a couple balls. Here’s thinking that a big turnover again will have an impact on this one.

3. Don’t Lose Sight of Boldin and Rice – They are two plamakers in the Ravens offense, and both guys can make big plays. Boldin showed that in his huge 61-yard catch and run in the second game. Rice abused the Steelers in the game in Baltimore last season, making the big fourth down catch to save the game for Baltimore. It may again sound like something small, but when Flacco is in trouble, these are two guys that he will look to as outlets that can make catches and make plays. The Steelers have to make sure not to lose sight of them at any point and time.

Prediction – While everyone is talking about how even these two teams are, and how they both play similar games, the Steelers do have advantages in this matchup. For one, they are the fresher bunch, they played a focused and determined game in Cleveland in week 17, and will have the eye of the tiger against the Ravens as well. They play well in divisional games at home, and usually come out swinging, like they did against the Ravens in the divisional matchup in 2001. Ben Roethlisberger has beaten the Ravens the last six times the two teams have played, and while the Ravens promise this time it will be different, the Steelers seemed determined to make sure that it won’t happen. Sprinkle in a near 100 percent Troy Polmalu, and the Steelers will be heading to the AFC Title game next Sunday. Pittsburgh 24 Baltimore 13