Roethlisberger Has Plenty of Good to Say About Jets Defense 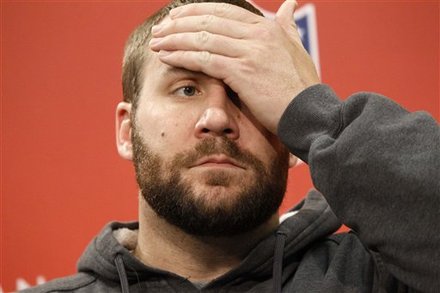 He’s seen them once before in 2010, and he’ll see them again Sunday with quite a bit more riding on the line.

Ben Roethlisberger knows what lies ahead for he and the Steelers offense Sunday evening. He’s played against Rex Ryan defenses before, seeing them just five weeks ago in a hard fought 22-17 home loss.

That day the Steelers did put up a lot of yards, 378 to be exact, but in the end, they scored just two TD’s and a field goal on a day that could best be described as missed opportunities and chances that slipped away.

“They’re a really good defense, point blank,” Roethlisberger said. “First time they came in here they put a hurtin on us here at home. They have a lot of great players from inside the line to the linebackers to the secondary. They try and confuse, that’s the big thing they try to do.”

Confusion is the thing that the Jets have done to both Peyton Manning and Tom Brady, beating two QB’s who just about everyone agrees are the best at what they do. It’s a point that Roethlisberger harped on more than once Wednesday, and a point that he doesn’t take lightly heading into Sunday night.

“It starts with coach Ryan, he’s a mastermind at what he does,” the QB said. “It’s extra study, it’s extra walk though, as much as you can do. The Jets beat the two best quarterbacks at their place, I don’t know how I’m going to do it.”

How he’s going to do it is the big question. The one thing he has going for him is his ability to extend plays. Unlike Manning and Brady who are more pocket passers, Roethlisberger can scramble with the best of them in the league, and making plays with his legs is something he very well may have to do in order to make plays against a tough Jets D.

The last time the teams played Roethlisberger went 23-for-44 for 264 yards. He was sacked three times and threw a 9-yard touchdown to Matt Spaeth in the game that tied it at 7. The final play of the game, an incomplete pass intended for Spaeth, was the one that sticks out, as it could have been a game winner in a game that slipped away.

“A lot of confusion, I think it’s one of the things they pride themselves in,” Roethlisberger said.

He will be counted on to make some plays Sunday, and with that, Roethlisberger knows that it will be a chess match between he and the Steeelers offense and Ryan and the Jets defense.

It’s a matchup he hopes will net even more points this time around, and a matchup he hopes by late Sunday night will favor the Steelers as they start making plans for Dallas for Super Bowl XLV. For now, the QB knows the challenge that lies ahead.

“I have a lot of respect for those guys, on defense, they are so good, I could just sit there and talk about them all day,” Roethlisberger said. “They went into Indy and in New England and won both games, nuff said.”